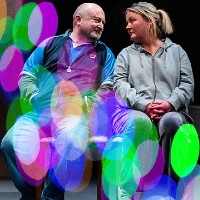 It's back to the BBC's virtual theatre festival for what must be one of the most-anticipated entries: David Ireland is the most recent playwright to contribute to the Royal Court's dubious history of plays where babies meet a violent end, so he comes with a certain amount of notoriety. So far we've had plays that had already been seen by live audiences in one form or another; Sadie is one rescued from obscurity by the Lights Up season, as it had been commissioned by Cyprus Avenue's star Stephen Rea for his own company, only to be cancelled by lockdown. The BBC and Lyric Theatre Belfast (where Conleth Hill's production was filmed) stepped in to ensure the show (presumably slightly rewritten as it includes a few references to Covid-19 and lockdown) could be seen after all. A kind of memory play, it begins with middle-aged office cleaner Sadie (Abigail McGibbon) conjuring up her long-dead uncle Red (Patrick Jenkins,) a Catholic communist who'd married into her Protestant Northern Irish family but largely stayed out of their political conflicts.
He, and other figures from her past, are turning up in her subconscious because, as we eventually discover, she's trying to put her thoughts in order to talk to therapist Mairead (Andrea Irvine.) If opening up like this seems an unusual decision for someone as defensive as Sadie, it's because she's been dating a much younger man. 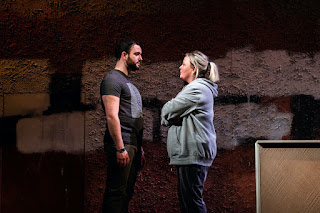 Portuguese-English 25-year-old Joao (Santino Smith) refuses to accept that any problems in their relationship mean they should either give up on it or struggle through ignoring them, and despite her reservations she starts to delve into her past, with much of the focus on life with her ex-husband Clark (David Pearse,) now also dead. Witty and abrasive, there's a lot of targets for Sadie's hatred but it's not surprising that it all comes down to self-loathing, and in equal parts hard-hitting and hilarious Ireland picks at the way her childhood created a woman seemingly doomed to unhappiness. 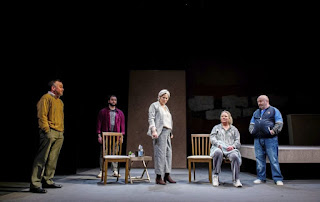 Although there are other themes I won't go into for spoiler reasons, Sadie is painfully topical, at a time when Brexit is triggering an entirely predictable return for the Troubles, in putting them at the heart of Sadie's psychological damage, and like Cyprus Avenue it returns to the theme that a life surrounded by hatred and violence is dangerous in more than just the obvious ways, poisoning people's minds long after the event. Even if Mairead's probing discovers much more obvious and specific events in Sadie's life that hurt her, the suggestion remains that this all takes place in an atmosphere that lets her normalise and accept things that shouldn't be normal or accepted. Hugely watchable, Sadie is a reminder of how uniquely good theatre is at dealing with big issues in a way that's simultaneously deeply serious and deeply entertaining.
Sadie by David Ireland is streaming until March 2022 on BBC iPlayer as part of the Lights Up season.
Running time: 1 hour 10 minutes.
Photo credit: Carrie Davenport.
Posted by nick730 at 20:43