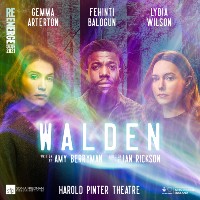 My first trip in over fourteen months to yer actual West End, much of which is hoping to go right back to normal in the next couple of months at full capacity. A few venues are more gradually dipping their toes back in with smaller-scale productions, playing to the socially distanced audiences allowed by current regulations. At the Pinter this takes the form of a short warm-up season, ReEmerge, courtesy of Sonia Friedman Productions and curated by Ian Rickson, who directs the first of three new plays. Amy Berryman's Walden is named after Henry David Thoreau's proto-Environmentalist book and is set entirely in a remote cabin in the woods that barely has electricity, but its genre is Sci-fi, not pastoral or slasher horror. It's some decades in the future and twin sisters, both Duchesses of Malfi, are the daughters of the NASA astronaut with the most Air Miles: Over a number of missions their late father spent a total of five years on the International Space Station.
Both sisters are genius scientists in their own right who've inherited his love of space, and both were instrumental in creating the technology that's it's hoped will terraform other planets. But while Cassie (Lydia Wilson) has just spent a year getting plants to grow on the Moon, Stella (Gemma Arterton) failed her physical and, in her disappointment, quit NASA and moved to the middle of nowhere. 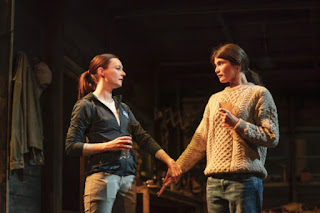 The sisters' relationship over the last year has been even colder than you'd expect from the fact that one of them was in Space, but Stella has invited Cassie to the cabin to celebrate her return, and to meet her new fiancé Bryan (Fehinti Balogun.) Rae Smith's set makes the cabin seem very basic but comfortable-looking, a safe haven in a world which - the news reports Stella listens to tell us - is collapsing under numerous environmental disasters and the resulting wars for dwindling resources. 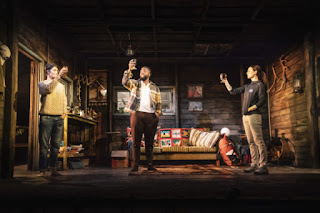 So Walden is at heart a play about the environment, and what happens past the point of no return; Cassie believes that point is long gone and the only hope is in colonising other planets, but Bryan is an "EA" or Earth Activist, who believes there's still a chance if only the resources were poured into regenerating the planet we're on, rather than an extreme escape plan for the 1% of the 1%. Creating the setting for a futuristic world, especially one that doesn't immediately reveal itself as such, is something that can easily be heavy-handed, but Berryman largely avoids these traps, gently building a world where Cassie is almost as impressed by Bryan growing vegetables on Earth, as he is at her doing it on the Moon. The play's environmental warning doesn't feel quite as subtly done, at least not at the start, and I did worry if the evening was going to drag. 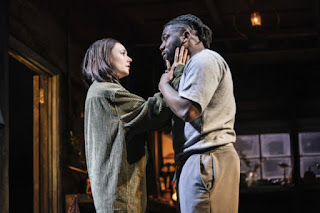 But I do say the secret to a successful issues-based play is the story and characters you wrap the issue around, and in its second half Walden remains gentle, but keeps you involved as the highly unusual and unique life the twins grew up in reveals the unexpected ways it's damaged them, and their peculiar blend of codependency and destructiveness. I also found it quite satisfying how Berryman teases that the story will devolve into a rather trite love triangle, only to shrug it off as a red herring for something a bit more complicated. This doesn't always hit the mark but it does so more as the evening goes on.
Walden by Amy Berryman is booking until the 12th of June at the Harold Pinter Theatre.
Running time: 1 hour 40 minutes straight through.
Photo credit: Johan Persson.
Posted by nick730 at 22:27