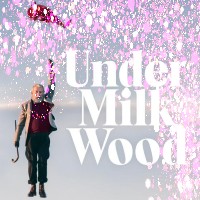 A collection of our more sprightly older actors populate Lyndsey Turner's production of Under Milk Wood, which reopens an Olivier Theatre that is wisely playing it safe, and staying in its temporary in-the-round configuration for the next few shows. And, after a year they probably spent shielding more carefully than most, I guess you could do worse as a high concept at the moment than a cast who've all had both their jabs. The reason for the high concept is that Dylan Thomas' beloved play for voices has been given a new framing device by writer Siân Owen, putting the action into the morning routine of a retirement home. After we've got to meet some of the staff and residents, Owain Jenkins (The Actor Michael Sheen) arrives unexpectedly in hopes of speaking to his father, whom he hasn't seen for a long time. So long that he doesn't realise Richard (Karl Johnson) has become almost non-verbal with dementia.
The staff tell him that old photos and memories can sometimes tease out lucid spells, so Owain becomes the narrator of Thomas' memory play, describing a typical day from Richard's childhood in the small Welsh town of Llareggub, beginning and ending with the dreams of the sleeping residents. 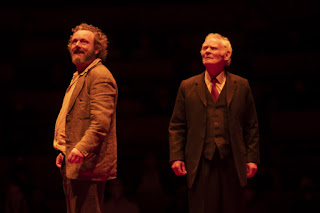 With the visuals largely imagined by the blind Captain Cat (Anthony O'Donnell,) the play was written for radio but has become popular as a stage show as well - I've seen it once before, when it was staged in the very same theatre a few decades ago - and it's not a popularity I quite get. Of course, it's the poetic language that's always praised, and I'm a bit of a philistine where it comes to poetry, at least if it's meant to be the main attraction. So however beautifully-spoken I never really tuned into the music of the language and I'm afraid I was bored for great chunks of the evening. The rich supply of eccentric characters is easier for me to get behind, as is the sharp edge to the nostalgia: Under Milk Wood undoubtedly has echoes of Our Town, but I don't remember Grover's Corners being quite as full of people bitching and gossiping about their neighbours 24/7 as Llareggub is. 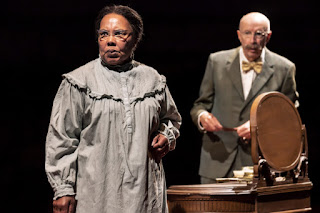 This is largely mined for laughs, with the postman making no secret of the fact that he steams open and reads everyone's mail before delivering it, and a recurring gag seeing Mr Pugh (Alan David) fantasising about poisoning his wife (Cleo Sylvestre.) In fact Thomas seems very fond of the battleaxe wife trope - Mrs Ogmore-Pritchard (Susan Brown,) has been twice married and twice widowed, but still nags the ghosts of both dead husbands (Michael Elwyn and David.) 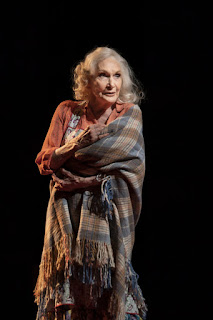 With Merle Hensel's designs dreamily taking us in and out of memory this is undoubtedly a great production of the play, and the unique casting conceit doesn't hurt - where else are you going to see the 88-year-old Dame Siân Phillips play the town floozie Polly Garter? But for me the play itself isn't one I can get too excited about, and the production isn't enough to convince me otherwise.
Under Milk Wood by Dylan Thomas with additional material by Siân Owen is booking until the 24th of July at the National Theatre's Olivier.
Running time: 1 hour 50 minutes straight through.
Photo credit: Johan Persson.
Posted by nick730 at 22:47