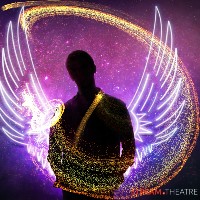 In the 1980s and '90s there was a whole raft of gay plays dealing - albeit sometimes with charm and humour, like Angels in America or My Night With Reg - with the bleak reality of living through the AIDS pandemic. In more recent years there have been new approaches to the subject, whether it be assessing the legacy of a lost generation like The Inheritance, or seeing what the disease means to younger gay men like Undetectable, Jumpers for Goalposts, or the recent Cruise. But Jonathan Harvey's Hushabye Mountain dates from 1999, and it consciously attempts to deal with an uncertain period of hope somewhere in between the two: AIDS still dominates gay men's lives and people are being lost to it, but AZT trials are promising a real hope of successful treatment. It's no longer an automatic death sentence but for Danny (Nathan McMullen,) currently in a celestial waiting room somewhere outside the Pearly Gates, it's come just a little bit too late.
Harvey's play jumps around in time, and between life and afterlife, to look into his last few years and the most important relationships in his life: With best friend Lana (Amy Dunn) and her fiancé Lee (Matt Henry,) through whom he met his boyfriend, Lee's brother Connor (Layton Williams.)

It's largely from Connor's perspective that we see the story, as he tries to deal both with his loss and grief, and with understanding Danny's mother Beryl (Jodie Prenger*,) whom he's always assumed to have ditched her son because of his sexuality. But as the play goes on we discover her to have been suffering a slow mental collapse, and despite her husband's demands that they cut off her son, had been secretly writing to him for years. When we first meet Beryl she's been in a mental hospital for a couple of years, and the first time she speaks since being admitted she claims to be Judy Garland. La Prenj also plays a character who may or may not be the actual Judy Garland in the afterlife, in her new job keeping people company as they wait to find out where they're going next. 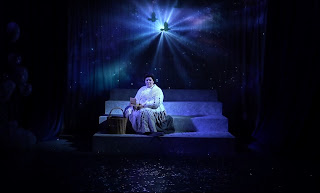 Nick Bagnall's production at the Hope Mill Theatre was shot specially for the stream.theatre platform and live-streamed last week; I watched one of a limited amount of repeat showings, which for some reason are only streaming at weekends. The staging, played without an audience, shows more of the ongoing development of how to mix theatre and screen - it's theatrical, with visible props and actors from other scenes being set up in the background, but it also feels like it's been blocked specially for the camera's viewpoint, I don't think you could necessarily drop the production on-stage as it is and have it work for the audience. In other words it feels like a revival where streaming was always the intention, rather than an afterthought, and that conveys what works about the play well. 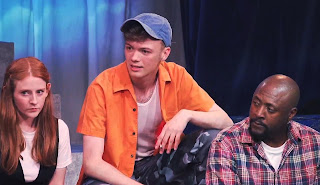 Which is its humour and quirkiness, but elsewhere the play is as muddled as you might expect from one occupying a couple of forms of limbo (both the afterlife one Danny inhabits, and the one the play does between AIDS as a death sentence and whatever was going to come next.) Probably the clearest way it shows this is with how Connor deals with Ben (Harrison Scott-Smith,) a potential new romantic interest‡ who's also HIV-positive but responding well to treatment. While it's true that Ben reacts to his diagnosis by drinking too much and becoming obnoxious, the real reason Connor dumps him may be that he represents the fact that Danny died just too soon for help to become available. But in other respects the play never quite coalesces. It's about chosen family, in that they're dysfunctional, and at times it can descend into pretty relentless arguments; also the supernatural element is left up in the air, I'm not sure the play ever quite decides who's hallucinating whom. And why everyone is suddenly quite so sweary in the wedding scene, and that scene only, is anyone's guess. It's well-performed and there's no doubt individual scenes demonstrate Harvey's ability with sharp, slightly twisted comedy and emotional truth, but I found it frustratingly unable to pull its various strings together.
Hushabye Mountain by Jonathan Harvey is streaming until the 20th of June on stream.theatre.
Running time: 2 hours 20 minutes including interval.
Photo credit: Hope Mill Theatre/stream.theatre
*look I know that as soon as actresses hit 40 they're automatically typecast as mums if not grannies, but I've checked the actors' ages, she'd have had to have had him aged 11, no wonder her mental health suffered
‡how's this for one of those "Wanna Feel Old?" clickbaits? Kylie from Beautiful People isn't even playing the twinky boyfriend any more, he's playing the older guy with the twinky boyfriend
Posted by nick730 at 21:56