Rehearsed reading review:
A Brief List of Everyone Who Died 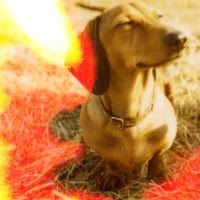 Not all theatres can reopen in person just yet: If the Finborough attempted to do social distancing that'd be one audience member in the theatre and the next one at Earl's Court station, so for the moment they're still going strong with online content. Some brand-new content in the case of Jacob Marx Rice’s tragicomic A Brief List of Everyone Who Died, which gets its world premiere as a Zoom rehearsed reading, directed by Alex Howarth. At the age of 5 Graciella (Vivia Font) has her first experience of death; her parents (Caoimhe Farren and Paco Lozano) try to get her to say goodbye to her pet dog before he's put down, but she's distracted. The next day she's forgotten what they told her, and when she realises she'll never see her dog again she blames them for the loss. It becomes a frequently-recounted anecdote but it also feeds into Marx Rice's recurring question of whether someone's first experience of death in childhood influences the way they deal with it for the rest of their lives.
The title describes the play pretty literally: We follow Graciella throughout her life, meeting her only at times when someone or something has died - whether close friend or family member, pet, vague acquaintance or, in one instance, an iPhone. Along the way we meet childhood friend Jordan (Raphael Bushay,) who remains close to her as they grow up but, as he starts to experience depression, finds himself with a distinct relationship to death of his own. Later her girlfriend and eventual wife Cass (Gemma Barnett) joins the family, and as they grow older the rest of the cast double up as the younger generations.
Moving in a matter-of-fact sort of way, A Brief List of Everyone Who Died has the premise that Graciella's approach to death - it's a running joke among her family that she overrracts to even the death of a goldfish, and still thinks she can forbid people from ever dying like she tried to at the age of 5 - is a bit quirky, but that's something of a red herring: Her life has what seems like an average number of losses, a couple of tragically young ones but not an exaggerated soap opera amount, and ultimately her response feels a very human one, of growing up and becoming more familiar with how life has to end, but never quite accepting it as anything other than an alien concept. Perhaps the only unusual thing is how open she is to admitting that she hasn't made her peace with it, making for a gently intense and human 75 minutes, covering roughly 75 years.
A Brief List of Everyone Who Died by Jacob Marx Rice is available until the 20th of June on the Finborough Theatre's YouTube channel.
Running time: 1 hour 15 minutes.
Posted by nick730 at 15:12