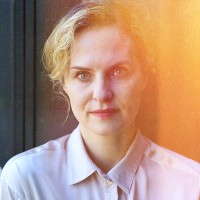 The next BBC Lights Up offering comes courtesy of the Bush Theatre, where Phoebe Eclair-Powell's Harm had been due to premiere during one of the various false starts of the last year. Instead Atri Banerjee's production of the monologue has been reimagined on location, with Leanne Best's nameless Woman wandering the empty rooms of a modern mansion. She's an estate agent who, after selling the place to Alice, a minor Instagram star, struck up an unlikely and very uneven friendship with her. To Alice, The Woman is an older acquaintance who can be an occasional drinking buddy and a sounding board for her frustrations about trying to get pregnant, but to The Woman Alice very quickly becomes an obsession: Soon she has a secret online alter-ego, sadbitch11, dedicated to taking down her new friend.
In Eclair-Powell's sharp satire of trolling and the love-hate relationship people have with influencers, The Woman equal parts loves Alice and wants to be friends for real, and hates the picture-perfect image she presents, sabotaging it less and less subtly. 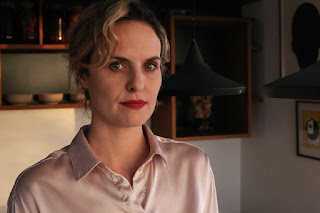 Harm is an effective black comedy, and Best pitches her performance with just a little touch of mania behind the eyes - her beaming at the camera as she informs us she'd like to cut a yoga instructor's tendons and "hobble the bitch" is hilarious - but it gradually builds to something more tragic as the real damage to The Woman's mental health becomes apparent, and both she and the object of her obsession become victims of it. Harm is a savvy look at the viciousness encouraged in some corners of the internet, but also at the loneliness and sadness behind it.
Harm by Phoebe Eclair-Powell is available until October 2021 on BBC iPlayer as part of the Lights Up season; its stage debut has been rescheduled from the 17th of May to the 26th of June at the Bush Theatre.
Running time: 1 hour.
Photo credit: BBC / Angelica Films / Andrew Fettis
Posted by nick730 at 21:03