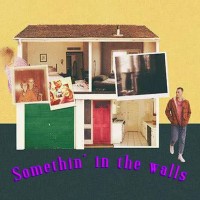 Southwark Playhouse's current home on Newington Causeway has been rechristened Southwark Playhouse Borough, to differentiate it from the new venue down the road that it's going to be coexisting with for the next couple of years. It's also once again become the host of the annual Papatango playwrighting prize after it moved to the Bush last year - although it's now in the Large space after several years in the Little. I've often thought Papatango tends to favour fairly downbeat plays, though they generally come with some spark of inspiration that makes them worth catching. Well 2022's winner, Clive Judd's kitchen sink play Here, definitely provides the downbeat part, but unfortunately I personally failed to find in it the redeeming features to make its hefty running time worthwhile. The kitchen is in the West Midlands home of Monica (Lucy Benjamin,) which she inherited when her father died two years earlier, and which still has the 1980s decor he left behind.
Monica, her daughter Jess (Hannah Millward) and husband Jeff (Mark Frost) get an unexpected visitor in her nephew Matt (Sam Baker-Jones,) who they haven't heard from since the funeral. 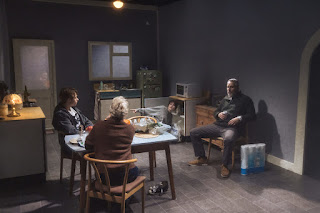 Matt's mother, Monica's sister, is the black sheep of the family who got pregnant very young, and tends to disappear for long periods at a time, so Matt has been raised in an unpredictable, nomadic lifestyle, and is a bit of a vague and ethereal presence with a fondness for recording ambient sounds. He may also have been sleeping rough before turning up at his aunt's home, although by the looks of him there's also the distinct possibility that he spends 23 out of every 24 hours in the gym anyway. 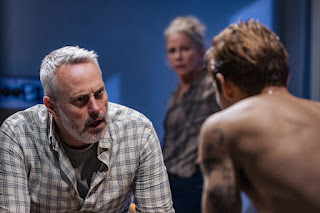 There are a few underlying themes that build up over the evening: Jess' relationship with a much older woman and her mother's concerns about it; Jeff's gambling problem that he hasn't got as under control as everyone thinks; Matt's hope that recording the sounds of the house will pick up the ghost of his dead grandfather. But these are spread out over 150 very low-key, morose minutes with deeply defeated people. It's not just the literal kitchen sink that makes this a kitchen sink play: It doesn't feel particularly distinguishable from the wave of It's Grim Up North (of Leamington Spa) plays of sixty years ago, and its dialogue is so minutely naturalistic it's about 99% banality to every 1% revelation; it's bad enough having your own extended family tell you what happened at their church last week, never mind someone else's. 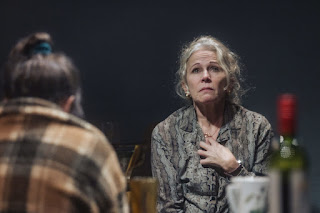 George Turvey's production sticks for the most part to this slow, humourless naturalism, its most notable stylistic flourish being Jasmine Swan's set design, which wraps the thrust staging in a semi-transparent gauze, separating the cast from the audience. It's a conceit I remember seeing in Anthony Neilson's Relocated, where it was used to effectively create horror, so when Matt's ghost-hunting plotline was introduced I thought that might be where we were going, but instead the gauze walls only really serve as a rather literal nod to the claustrophobic situation (either that, or they didn't trust the audience to look at Baker-Jones' abs without some kind of barrier in the way.) There are also ovens and cupboards along the side walls - I was in the middle seating bank, but I did wonder how much the view was obstructed from the sides. 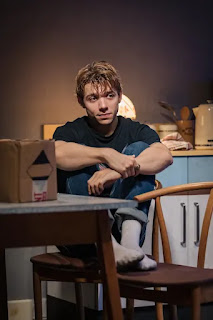 The cast are all doing strong work with what they're given - Millward has fairly short stage time to give us all of Jess' frustration and dissilusionment, Frost supplies the steady, supportive voice despite his character's own demons, and Benjamin works hard to bring some sympathy to a character who seems to fundamentally despise all humanity, but especially those members of it she's related to. Baker-Jones impressively gives an otherworldy quality to a character who's somehwat inconsistently written - I think he's just meant to be emotionally damaged but at times the writing suggests learning difficulties or neurodiversity. Here seems to have found a number of fans, and sometimes a slow burn really pays off for me as well, but in this instance I didn't think the payoff was there.
Here by Clive Judd is booking until the 3rd of December at Southwark Playhouse Borough's Large Theatre.
Running time: 2 hours 30 minutes including interval.
Photo credit: The Other Richard.
Posted by nick730 at 22:54