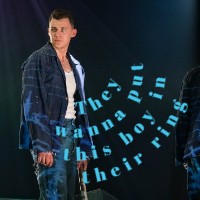 When Stuart Brayson (music) Tim Rice (lyrics) and Bill Oakes' (book) musical adaptation of From Here To Eternity debuted in the West End in 2013, I found it hard work, but the songs from Brayson were a highlight, and have stayed on my playlists since. So on balance I decided to give it another go in its off-West End return at Charing Cross Theatre, where it gets a smaller-scale production from Brett Smock. And while it still feels like adapting James Jones' novel and the classic film for the stage was an idea flawed from its conception, this more streamlined take on the show (it's a revised script with a number of songs moved, removed or replaced with new ones entirely - the balance of book to music was one of my issues with the original) is a definite improvement. The action takes place in Hawaii in the fortnight before the 1941 Pearl Harbor attack.
Private Prewitt (Jonathon Bentley) has just transferred to G Company, after a boxing match at his previous base left his opponent blinded. He wants to make a fresh start and leave fighting behind him, but it turns out his boxing prowess is the only reason G Company took him. 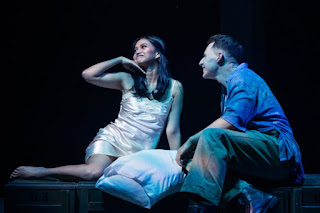 With the US not yet committed to the Second World War, the soldiers are stationed in Hawaii indefinitely with no immediate plan of action, so an upcoming boxing tournament is all anyone can think about. The superiors believe a win will bring glory for the company and promotions for themselves, and the privates have been instructed to make Prewitt change his mind by any means necessary. The soldiers' frustrations get taken out in a prolonged bullying campaign against him, that also takes shots at his new friend, resident wheeler-dealer Maggio (Jonny Amies.) 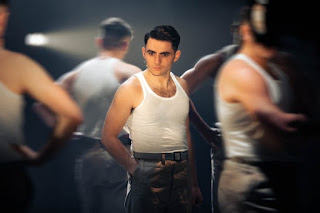 Of course the film has become best-known for its sandy romances; Prewitt has fallen for prostitute Lorene (Desmonda Cathabel,) while Sergeant Walden (Adam Rhys-Charles) is having a dangerous affair with Karen (Carley Stenson,) the wife of Captain Holmes (Alan Turkington.) The women are highlights of the show, so it's a shame they don't feature that much - Stenson is probably the biggest name in the cast and certainly feels underused, there's real stage presence every time she's there. Unfortunately the same can't be said for the chemistry - the two male leads have been cast based on their strong voices that really bring their songs to life, but there's a woodenness to both that makes the central romances hard to care about (although again, Rice and Oakes' writing has to take a lot of the blame for that.) It also really doesn't help that Prewitt's personality is entirely defined as someone who boxes and plays the bugle, neither of which he actually does in the show. 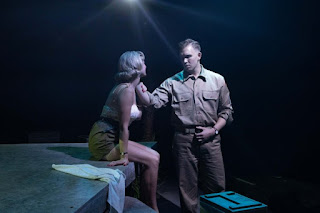 Rounding out the female cast is Eve Polycarpou as brothel madam Mrs Kipfer - her "I Know What You Came For" is one of the all-new numbers (replacing "Don'cha Like Hawaii") and she brings a fearsome edge to these scenes. The lack of a female ensemble is felt most strongly here though, as the nightly goings-on are represented by soldiers and sailors wandering on and off stage, circling each other with their trousers round their ankles - I mean sure, it reads "brothel," just maybe not the sort they were aiming for. 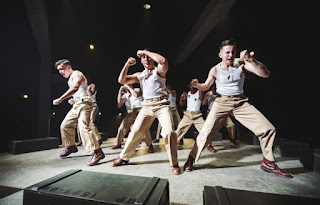 Obviously it's nine years since the original so it's hard to compare with confidence, but it does feel like the rewrites - Donald Rice has been added to the book-writing credits for this production - have got rid of much of the most cringeworthy dialogue as well. On the other hand the central story is pretty monotonous: It's very much a couple of hours of the company coming up with ever more aggressive bullying tactics to make Prewitt box again, and it leaves little time to develop the romances, let alone the subplot about closeted Private Bloom (Jack Ofrecio) taking out his frustrations in cruel ways. 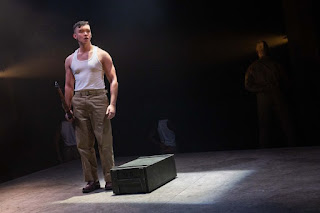 So From Here To Eternity is still a mixed bag, and though I haven't read the novel it gives the strong impression of trying to keep too many of the plot beats from that, leaving itself little room to actually develop any of them. It also remains unable to filter its 1940s attitudes through a 2020s light, leading to a trigger warning list so long that everyone coming through the doors commented on it. But in this iteration the mix leans slightly more to the positive - the fact that it's 25 minutes shorter than the original won't be hurting with that, but some of the naffer elements have been tidied up as well, and the balance between book and music feels the right way round this time. And while not revolutionary Brayson's songs remain catchy, and the climactic tribute to "The Boys of '41" is moving - no mean feat when the entire show so far has painted the US Army as dangerously aggressive, corrupt and undisciplined.
From Here To Eternity by Tim Rice, Stuart Brayson, Bill Oakes and Donald Rice, based on the book by James (not Earl) Jones, is booking until the 17th of December at the Charing Cross Theatre.
Running time: 2 hours 30 minutes including interval.
Photo credit: Mark Senior.
Posted by nick730 at 23:01