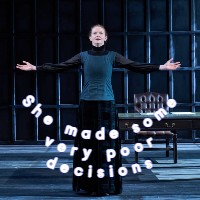 Rona Munro's second James Plays trilogy has kicked off in Scotland (hopefully with a London run in its future) with James IV, but before that there's another entry in her cycle of plays about the Stuart rulers. Although Mary feels like a bonus feature rather than the next chapter, and not just because it's premiering out of chronological order: Instead of the bloody epics of the main sequence, Mary is a two-scene discussion with just three characters, and the titular Queen of Scots isn't even one of them. There is a James though, but he's not King: James Melville (Douglas Henshall) is a Lord loyal to the Queen at a time when much of the Scottish aristocracy seems to be plotting against her. We open at Linlithgow Palace in 1567, shortly after the murder of Mary's second husband Lord Darnley, father of James VI and I. The scheming Lord Bothwell is the likely culprit, but gossip also puts Mary herself under suspicion.
Melville sees that the tide is turning against his beloved Queen, and the first scene is a battle to convince the gatekeeper Thompson (Brian Vernel) to let her escape her plotting court. Opposing Melville is servant Agnes (Rona Morison,) a staunch Protestant and vocal activist who's concerned the Catholic Queen will try to take the country back to the old religion. 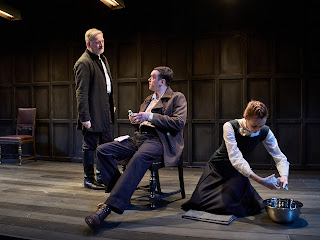 The Queen does get away but not for long, and in the play's final hour, set a few months later, the balance of power has switched: In return for certain favours, Thompson has now risen to become a senior advisor to Mary's half-brother, who's acting as Regent. The Queen has, most likely through a lot of coercion, married her husband's presumed murderer Bothwell, and the plot to get rid of her is out in the open: Thompson has been tasked with convincing Melville to add his name to the many Lords who've signed a letter to force her abdication. But Agnes, who's seen more of how men subdue a woman in power, is beginning to question her initial harsh judgment of the Queen. 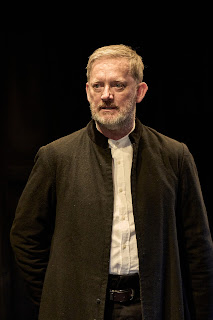 Just as The James Plays aim to give Scottish Kings their moment on stages dominated by Shakespeare's versions of English Kings, so Mary is a different perspective on a monarch who's a much more popular dramatic subject, but usually through a very specific lens: Most depictions of Mary Queen of Scots, including the most famous one, frame her story through her (long-distance) relationship with her English counterpart. Mary gives us the prequel to her imprisonment in England, and perhaps the seeds of how she was cast as such a threat to Elizabeth, but what it predominantly shows is how many of the enemies fought off were a lot closer to home, and instead of a standoff between two powerful women, it gives us Mary outnumbered by ambitious men. 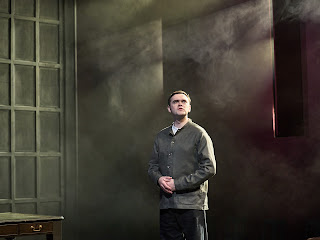 You can see how, having committed to an ongoing epic, Munro might want to take a break in the middle to flex different writing muscles, telling history in a more intimate way. The result is a partial success: This isn't the most famous part of Mary's history, so presenting it second-hand means I did feel thrown in at the deep end, especially to begin with. Eventually though things begin to crystallise, and one of the joys of the play becomes learning more about the history and conspiracies surrounding the Queen. 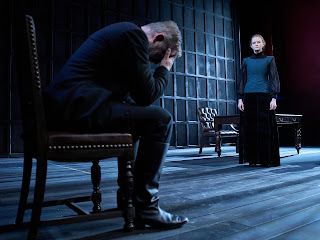 Munro also ties Mary's story in with modern conversations about sexual assault and consent, and while this is ultimately the play's unique angle, it does feel as if the structure she's given herself is a bit too minimalist to really carry both the fast-paced historical events and the modern commentary. Director Roxana Silbert and designer Ashley Martin-Davis try to open the fairly static play up as much as possible, and the cast help make 90 minutes of three people arguing about politics and sexual politics more compelling than that sounds, but the limits Munro's set for herself do constrain it at times. It is, as I say, a partial success though: For the most part it achieves its goals, but it does occasionally get tangled up in its ambition to cover multiple huge topics in a minimalist way.
Mary by Rona Munro is booking until the 26th of November at Hampstead Theatre.
Running time: 1 hour 30 minutes straight through.
Photo credit: Manuel Harlan.
Posted by nick730 at 22:04