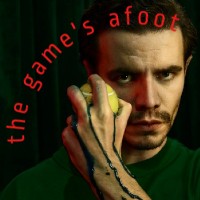 This year's second London Henry V is a radically different beast than the Donmar's bombastic war epic, and different in fact from any I've seen before in 30 or so years of Shakespeare productions. The clichéd view of the play is of a jingoistic celebration of Englishness, but in the last two decades it's been rare to see it through anything other than a cynical eye as a story of British imperialism, and increasingly through the prism of an arrogant attitude towards Europe. Holly Race Roughan's production for Headlong, which opens at the Swanamaker before transferring to Leeds and Northampton next year, takes it right out of the canon of Shakespeare's Histories, reimagining it entirely as a brooding and claustrophobic Tragedy. And if I was less excited than some about Kit "Christopher" Harington's casting earlier this year, Big Favourite Round These Parts Oliver Johnstone getting his chance at one of the big Shakespearean leads is more the kind of thing to grab my attention.
And Johnstone doesn't waste the opportunity, in a performance that's not so much reminiscent of other Henry Vs, as it is an amalgam of Hamlet, Macbeth and, eventually, Richard III. 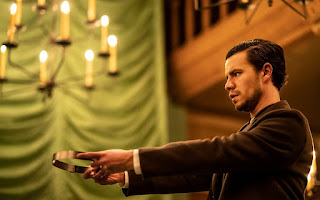 It's common for productions of Henry V to add a scene or two from the earlier plays in the tetralogy, and in Race Roughan's case it's the one where Hal has, prematurely, taken the crown from the father he believes to have already died. When Henry IV (Helena Lymbery) briefly revives, after berating his son for his impatience he finally dies regretting that his path to the crown leaves his heirs with a dubious legitimacy, and hoping his son can put any doubts to rest. This becomes the inciting incident that sends the new king on an obsessive path to prove his claim to England in an incredibly convoluted way: By proving a claim to the throne of France, and starting a bloody invasion of the neighbouring country. 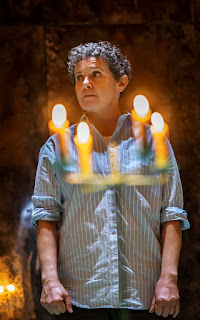 In style the production is a stripped-back one: Moi Tran's designs cover the stage in hospital green, before the back curtains eventually rise to display a wall of tarnished mirrors. The cast for the most part stay in one costume throughout regardless of doubling, announcing at the beginning of each scene what character they are now playing. Initially staying onstage throughout, once the curtains go up the cast also start exploring the space more, moving around the theatre. But the most notable element, certainly if you've seen the play many times before, is Max Pappenheim's mournful, sinister music, that helps move this away from war epic, and laser-focus it into a character study of Henry himself. 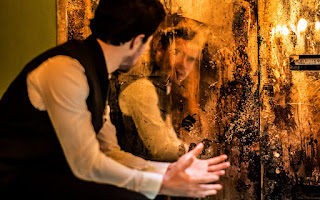 So the most famous speeches are no longer performed to crowds of soldiers: "Once more unto the breach" becomes a soliloquy, Johnstone delivering it to himself as a pep talk into the mirror. This is the story of a man psyching himself up to do whatever is necessary, including becoming utterly corrupted - if he starts as introspective as Hamlet, he's coaching himself to become Macbeth. It's suggested that the reference to Scroop (Dharmesh Patel) being his "bedfellow" is a literal one, and that it's a former lover who betrays him, and gets coldly sent to his death in response. (There's a slight mirroring of this relationship in Eleanor Henderson's Dauphin and James Cooney's Orleans, but it seems the "bad guys'" relationship is a much healthier one.) 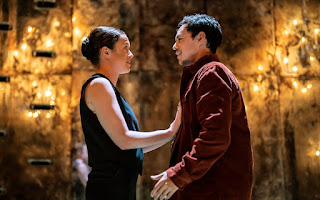 We don't really get the sense of Jon Furlong's Bardolph, unusually coming across as the sensible one of that particular group, having been Henry's friend as well, but his execution does get a disturbingly grotesque Wicker Man take, the cast cheerfully dancing around him to the theme from The Archers as they slowly throttle him. 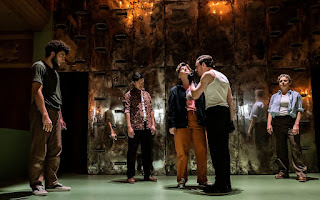 Henry continues to leave his humanity behind in pursuit of his goal and living up to what he thinks his father wanted: The production is regularly punctuated by the cast singing "God Save The King" (a theme I imagine wouldn't have been as dominant if we hadn't just changed back the lyrics to the National Anthem in real life,) but the frankly uncomfortable gloating over the names of the French dead after Agincourt dispels any notion of this being a "gracious" king. Henry's now so removed from empathy that when he decides to play a practical joke on Fluellen (Joshua Griffin) he does so with a corpse at his feet, having taken hands-on revenge on the ambassador who mocked him with tennis balls at the start of the play. 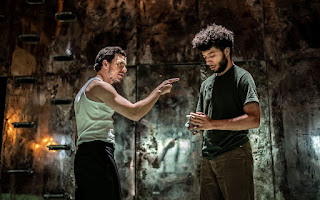 The transformation all the way into Richard III comes at the "wooing" scene of Katherine (Joséphine Callies,) by which point Henry has devolved into a straightforward sexual threat, glorying in both his power over his future queen and in the King of France's (Geoffrey Lumb) inability to protect his daughter. The comic "English Lesson" scene gets moved and radically repurposed here to devastating effect. To be honest, this monolithically oppressive approach, especially from the music, would probably bore me if applied to one of the plays more traditionally treated as tragedies, but seeing it used to reinvent the play - and particularly a play it's so rare to see reinvented - means it stays refreshing and fascinating. 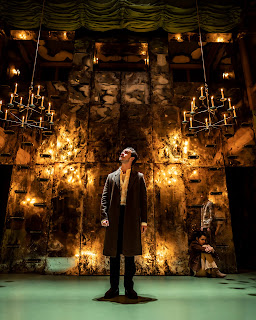 If there's one big misjudgement it comes right at the end, when Race Roughan adds a coda that relates Katherine's arrival in England to Britain's modern-day treatment of immigrants, contrasting the values espoused by the Life in the UK test with how they're actually expressed. It's an interesting way to end a production of Henry V, just not this production of Henry V, which has until this point found a different approach than most recent takes. But if it falls at the last hurdle the production leaves a very strong and memorable impression, both in the overall conceit and its impressive lead: Henry V is a big moment in any Shakespearean actor's career, and Race Roughan has asked Johnstone to add whole new layers to the character, something he's done with frightening intensity.
Henry V by William Shakespeare is booking in repertory until the 4th of February at the Sam Wanamaker Playhouse; then continuing on tour to Leeds and Northampton.
Running time: 2 hours 20 minutes including interval.
Photo credit: Johan Persson.
Posted by nick730 at 22:48