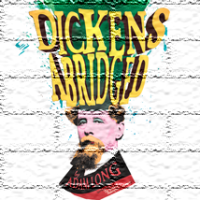 I wasn't sure if I was going to bother with Dickens Abridged, in which Adam Long of the Reduced Shakespeare Company gives the same treatment to another of England's best-loved writers. This was largely because unlike Shakespeare, Dickens isn't a particular favourite of mine, so although I'm as familiar with the broad strokes of his stories as anyone, I'm not interested enough to get every in-joke. But there was a GILT offer for the show, and there's worse ways to start the year than a bit of Jon Robyns. Not that bit of Jon Robyns - that would be one hell of a start to the year. No, he's fully-clothed as one of a five-strong cast who, through songs and sketches, do a 100-minute run-through of the life of Charles Dickens, as well as some of his best-known stories (what with all the short stories and Boz sketches on top of the novels, the show makes no claim to present the complete works.)

Long directs a cast of British musical theatre performers, which adds a level of the surreal to the revue's conceit, as part of the gag is that this is an American troupe, "Santa Cruz's number one Dickens impersonators," whose accents and bluegrassy musical style conflict with the foggy Victorian London they're trying to evoke. 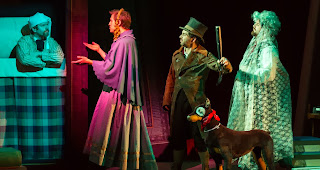 Damian Humbley plays Dickens himself, with Robyns, Kit Orton, Gerard Carey and Matthew Hendrickson taking on all the other people in his life, as well as the large casts of his novels. As this is very much an affectionate poke at the writer's life and works the way he treated his family is only lightly touched on, and we get a fun romp through his life, as he finds great success but ruins his health by being just too enthusiastic about performing the murder of Nancy night after night. Meanwhile as he becomes world-famous and tours America, his first boss keeps wondering if he might reconsider going back to his promising career at the boot-blacking factory. 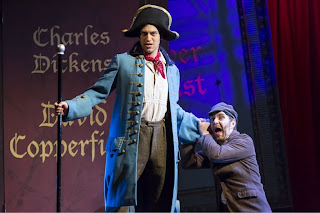 His life is interspersed with snappy renditions of his books: Oliver Twist is represented by an Oliver! parody; the autobiographical David Copperfield gets a pretty lengthy segment, its story held up against Dickens' real upbringing; and in a running joke, Carey struts across the stage with his guitar only to deliver a limerick-short summary of one of the less popular novels. The best segment is A Tale of Two Cities, which is not only funny but against all odds Robyns manages to make quite moving as well. 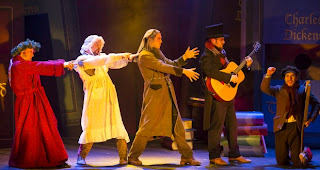 Pacing is the only real drawback of the show, as although all the songs are tuneful, only a few of them are funny, and those that don't mean the comedy loses momentum - the presence of the dreaded unnecessary interval doesn't help either. Generally the sketches are better, and there's some great moments like the representation of Miss Havisham on fire, the guillotine at the end of A Tale of Two Cities - the way it's integrated into Mark Bailey's set is a good gag in itself - and Carey's Tiny Tim trying to dance on his knees. Given the energy and talents of the cast this feels like it's not quite as funny overall as it should be, but when it hits the mark Dickens Abridged shines.

Dickens Abridged by Adam Long is booking until the 5th of January at the Arts Theatre.