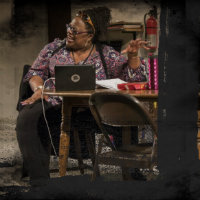 Whether it’s tackling racism with hilarious consequences, or tackling capitalism with… well, there were definitely consequences, for those of us who had to sit through it at least*, Bruce Norris hasn’t been a playwright to shy away from a tricky subject and an explosive format. Downstate is more low-key than some of his earlier work but subjects don’t get more contentious than convicted paedophiles, or Norris’ - impressively successful - attempt to approach them in an even-handed way. Todd Rosenthal’s set is the shared living room of the four-bedroom Illinois bungalow that serves as a halfway house for sex offenders who’ve served their prison terms, but are still considered dangerous and have to live under severely restricted conditions. Early in the play we discover a new one of these restrictions, as the exclusion zone around a school has ben extended to include the local grocery store – as well as the bus stop that would take them to the next best option.

The US sex offenders’ register requires that the address be publicly known as well as the men’s history, so on top of their window having recently been shot through, a man has arrived to confront one of the residents. 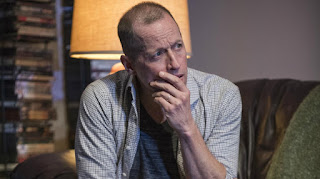 Andy (Tim Hopper) was abused as a child by his piano teacher, and as recommended by his therapy group has turned up to confront the now wheelchair-bound Fred (Francis Guinan) and get him to read and sign a reconciliation statement. But while Fred has never denied his guilt, there’s one crucial detail about how the two men remember the time of the assault that they can’t agree on. Pam MacKinnon directs a co-production between the National and Chicago’s Steppenwolf (where it recently premiered,) and so has a multinational cast of American and British actors – which means Cecilia Noble gets to revisit the scene of last year’s triumph for a very different role as hassled parole officer Ivy, who has to deal with the possibility that the nervy Felix (Eddie Torres) has violated the terms of his release. 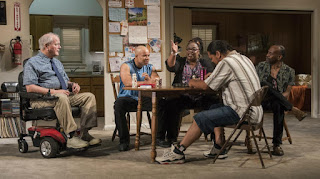 Norris’ impressively unbiased approach means we can absolutely see the human nature of the four men and the extremity of their punishment; one of the play’s themes is how this particular crime is such an emotional trigger that otherwise liberal people demand the death penalty for it – even those who acknowledge the perpetrators to have an illness. At the same time we never get to forget the levels of self-deception that allow the men to forget they’ve hurt people: The most superficially relatable character is K Todd Freeman’s Dee, who still maintains he had a consensual loving relationship with the 14-year-old boy who continued to write to him in prison for years, and is now a self-appointed mother hen to the house. Gio (Glenn Davis) is a Category 1 (statutory rape of a girl he claims showed him a fake ID) and doesn’t think he belongs with the Category 3s in the house, as well as using his religious beliefs to justify homophobic comments about those men who attacked girls not being as bad as those who attacked boys. 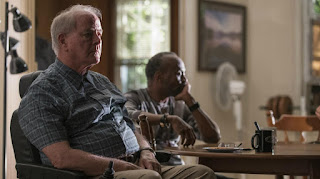 Creepiest of all is Fred, whose aw-shucks persona doesn’t disguise the fact that for all his superficial admissions of guilt and deserving his punishment, he fundamentally doesn’t understand that he mentally scarred Andy, playing the same music and offering him the same cookies he did when the latter was twelve. Norris also looks into the confused emotion of the victim in adulthood – I wondered if his insistence that Fred did something to him that he only admits doing to his other victim was Andy still holding on to the insult that he might not even have been the favourite. In any case, if he thought his confrontation with his abuser would allow him to scream out his frustrations, he’ll find there’s only more of them in store. Plot-wise, it’s frustrating that the second act opens with a pretty obvious giveaway to a twist that takes an hour to actually get revealed, but overall Norris’ use of humour and humanity to look at an issue that resists black or white explanations makes for a brave and affecting evening.

Downstate by Bruce Norris is booking until the 27th of April at the National Theatre’s Dorfman.