Theatre review: Grief is the Thing With Feathers 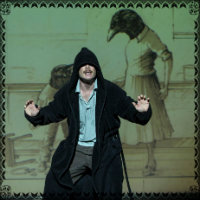 Max Porter’s Grief is the Thing with Feathers is a poetic novel about a man who’s unable to tell the difference between Grief and a duster suddenly left widowed and looking after two young sons; as well as dealing with the grief he also has to figure out how he’s going to organise his family’s life now that the person who did it all is gone, and once all the well-meaning visitors have left. A writer who’s meant to be starting a book on Ted Hughes’ Crow poetry, Hughes’ trickster bird becomes an imaginary friend to both him and his children, guiding them through the process in an erratic, sinister way. Enda Walsh adapts and directs the text for the stage as a vehicle for his regular collaborator Cillian Murphy, who plays the grieving Dad, as well as the Crow. Designer Jamie Vartan has provided a vast, mostly empty flat for Murphy to play out the story in, helped by a lot of projection work from Will Duke.

In fact there’s a lot going on everywhere; this is a busy production full of sounds and visuals. The action takes place in 1987, with the famous hurricane being mentioned on the radio news, and storms feature heavily: The “flashing lights” warning should be taken very seriously, I had to close my eyes for a solid five minutes. This is one of those shows that hasn’t so much been made without epileptics in mind, as seeming to be actively trying to keep them out. 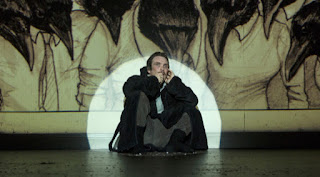 Duke’s projections include animations of the dream drawings Dad makes, as well as home movies from when Mum was still alive – Hattie Morahan plays Mum in these, and in audio recordings. When the children watch TV and pick out imaginary replacement mothers, Moira Stuart, the Oxo Mum and Wincey Willis are all candidates who scroll across the back wall. All the sound and fury doesn’t detract from Murphy’s dual performance as Dad and Feathers McGriefy Crow, but neither does it add much either. In fact I have surprisingly little to say about the show, except it failed to emotionally engage me despite all the technical elements, from the text to the performances and the staging, going all out.

Grief is the Thing with Feathers by Max Porter, adapted by Enda Walsh, is booking until the 13th of April at the Barbican Theatre (returns only.)