PREVIEW DISCLAIMER: The professional reviews for Richard II don't appear to be in yet. 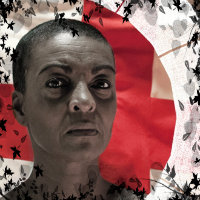 It'll get overtaken by the ubiquitous Midsummer Night's Dream later in the year, but for the moment Richard II is the Shakespeare play everyone wants a piece of. It's unsurprising given the grim topicality of John of Gaunt's speech, but at Michelle Terry's theatres it's also meant as the kicking-off point for the entire eight-play History cycle to be produced over the next year. Not that Lynette Linton and Adjoa Andoh's production doesn't stand on its own, being notable for its all-women of colour cast and company. The Swanamaker is currently also playing the story of how the title character's great-grandfather took his crown for granted and ended up losing it, but Richard (Andoh) isn't really one to learn lessons from the past and, having ascended to the throne at the age of three, assumes the god-given nature of his power means no mere human would dare to challenge it.

But he's counting without his cousin Bolingbroke (Sarah Niles, who must still be basking in the glory of having been repeatedly called a slut by an Oscar-winning actress,) whom Richard banishes as punishment for his quarrel with another nobleman.

When he also seizes Bolingbroke's inheritance to pay for a war in Ireland, Richard finds his cousin has become the figurehead for a rebellion by other lords tired of his capricious rule. Although, going against convention, Andoh doesn't really play him (the pronouns here are all kept as written) as a spoilt child but as a bully, furiously barking commands at everyone who gets in his way. Only when he starts to lose his grip on power does the familiar drama queen emerge.

Mirroring the diversity of the cast, Rajha Shakiry's design is multicultural - there's a primarily African theme, particularly in Dominique Le Gendre's music, but the costumes increasingly also take in Middle Eastern and Asian influences, while the stage is clad in bamboo. Hanging all around the Upper Gallery are faded photos of women - I wouldn't be surprised if they were real-life ancestors of the company members, as they're sometimes pointed at when the characters refer to some king or other great figure from the past.

The 2019 trend has been for comparatively short Dicks - this one doesn't quite race through it like the Almeida's but still comes in well under three hours. A big part of this is because the entire plot against Bolingbroke after he's been installed as Henry IV has been cut. Now I can't complain about anything that gets me out of the Swanamaker before I get permanent back damage, but I would have preferred it if Linton and Andoh had found other places to make their edits because Ayesha Dharker's eloquent Aumerle and Shobna Gulati's fussy Duke of York were among my favourite performances, and I'd been looking forward to seeing them tackle that very weird late subplot.

Also good are Leila Farzad's Queen, the only character Richard shows any actual affection for apart from himself; and Niles' Bolingbroke is pretty ruthless, his presiding over the farcical sequence of glove-throwing the only time I've seen the scene played seriously; I'm sorry to see she's not listed in the ensemble for the summer's installment of History plays, not only is she good but I'd also have liked the continuity of her carrying on with the role into the next part of the season. There were a few scenes that struggled to keep my concentration - it's still early days and some of the energy may pick up - but this is largely an effective telling of the story, and I loved watching an audience member opposite me as her jaw literally dropped at some of the plot twists.

Richard II by William Shakespeare is booking in repertory until the 21st of April at the Sam Wanamaker Playhouse.