Theatre review: The Taming of the Shrew
(RSC / RST & tour) 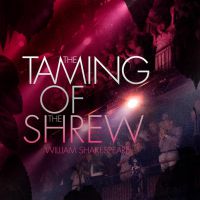 With Shakespeare's plays so well-known, and the amount of people who presumably include a theatre trip to one of the plays, whichever one's playing, in a visit to Stratford-upon-Avon, the RSC must get more than its share of audience members who don't really look at the description of the show. You could even miss the fact that Justin Audibert's production of The Taming of the Shrew was going to be notably high-concept. That would explain the "ooooohhhh"s of sudden understanding, after opening scenes full of women eager to push the plot forward, when Baptista (Amanda Harris) introduces her eldest and most difficult son, Katherine (Joseph Arkley.) Audibert's idea isn't to cross-cast the play but to set it in an alternate 1590 (the likely year of the play's premiere,) in which the world has developed exactly the same, but as a matriarchy. So wealthy women like Baptista run the show, and their sons depend on marriage to secure their futures. But the yobbish Katherine is too independent to attract a husband when there's more compliant men like his brother Bianco (James Cooney) around.

Bianco already has two suitors when Lucentia (Emily Johnstone) arrives in town and falls for him, but Baptista won't consent to letting him marry until her unfavoured older son can be got rid of. 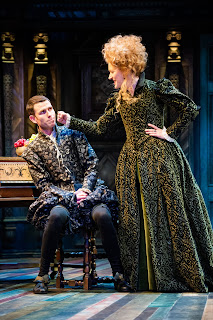 Lucentia conspires to find a suitable wife who'll love Katherine's dowry enough not to care about his personality, and finds her in her friend Petruchia (Claire Price,) who talks over his objections to get his mother's consent and marry him. While she takes him home and "tames" him, Lucentia and her rival Hortensia (Amelia Donkor) disguise themselves as Bianco's tutors to try and win his affections. 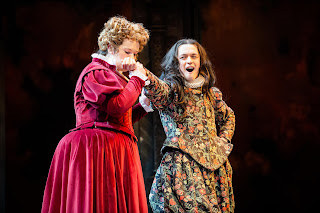 The story of a man turning a high-spirited woman into a docile Stepford Wife would be unpalatable today even if it wasn't for the fact that he uses LITERAL TORTURE to achieve it, so The Taming of the Shrew must be the Shakespeare play that's most often approached from a completely different angle than the one it appears to have been written from; whether it's toning down the viciousness and dialing up the ambiguity to make the central relationship into something other than it appears to be, or simply exposing the play's politics to turn it into a tragedy. Audibert's approach is a way of playing it straight: On the one hand the role-reversal is ridiculous, highlighting the fact that the way things have actually worked for millenia is equally absurd; on the other it's easier to laugh at Katherine's humiliation when it's a fantasy, and men don't really live in a world where a woman's power can bring them down on a whim. 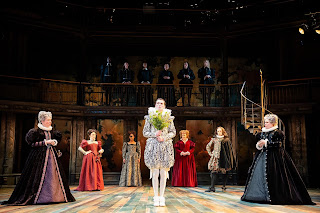 Ironically the play's very unpleasantness is probably what makes productions remotely watchable, because directors work so hard to find their own 21st century angle on it. As here, it can yield interesting results. What I've never seen end satisfactorily is any attempt to make the comedy work - and even in productions that aim more for tragedy you can't disguise the fact that this is the structure, particularly of the Bianca/o courtship story. 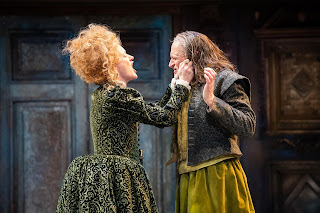 Here too, Audibert and his cast work hard - very hard, to the point of even getting a few laughs out of me. But there's no disguising the fact that it's them doing the work and they're getting nothing from Shakespeare. I've always argued there's no such thing as a Shakespeare comedy so funny you don't have to make an effort, but most of them at least give you lines and situations worth playing with. Shrew has little in the way of funny lines, and the comedy plot is clumsy. The concluding farce of the real Vincentia (Melody Brown) arriving and all the "I'm the real Vincentia" "No I am" "Yes you are actually, let's move on without this affecting the plot in any way" is right up there with The Merchant of Venice's titting about with rings as far as plotlines you know you have to plough joylessly through before you can go home are concerned. 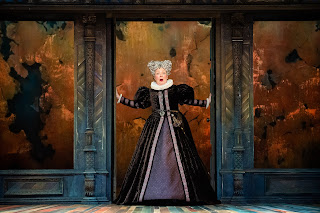 So there's a lot of pressure on the actors' physical comedy to carry the day, and the cast go great guns here. Sophie Stanton's Gremia is particularly funny as she floats across the stage in her floor-length dresses (some great costume design from Hannah Clark) and has a well-played running gag about trying to draw her sword. Laura Elsworthy's Trania is also consistently funny in her awkward attempts to impersonate her mistress, while Ruth Chan's music helps keep the energy up, acting at times like a film soundtrack that underscores the story's beats. So a great effort all round and about as watchable as I ever find the play. But while it confirms its status as a play that can provide endless intelligent, disturbing and original explorations of inequalities in the battle of the sexes, I'm yet to be convinced of The Taming of the Shrew as a halfway competently-written comedy.

The Taming of the Shrew by William Shakespeare is booking in repertory until the 31st of August at the Royal Shakespeare Theatre, Stratford-upon-Avon; then continuing on tour to Salford, Canterbury, Plymouth, Nottingham, Newcastle and Blackpool.