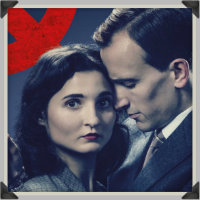 When Roy Cohn dies in Angels in America he’s visited by the ghost of one of the earliest and most notorious victims of his long and questionable legal career: Ethel Rosenberg, like her husband Julius, was sent to the electric chair for alleged collusion with the USSR at the height of McCarthyism, Cohn having been the chief prosecutor for the communist-obsessed senator. His role as mentor to a young Donald Trump means I won’t be surprised if Cohn himself starts turning up as a ghostly figure in plays still to come, but he doesn’t make an appearance in The Rubenstein Kiss, James Phillips’ barely-fictionalised version of the Rosenbergs’ case and legacy. A shame, because a larger-than-life figure might have been just the kick this long, drawn-out evening desperately needs. Jakob (Henry Proffit) and Esther Rubenstein (Ruby Bentall) are dedicated communists, something that doesn’t cause too many problems during the War, when the USSR is still America’s ally.

As a fairly nondescript New York Jewish couple they probably wouldn’t be a high priority even when McCarthy’s witch-hunt began, except for the fact that Esther’s brother David Girshfeld (Sean Rigby) worked on the Manhattan Project. 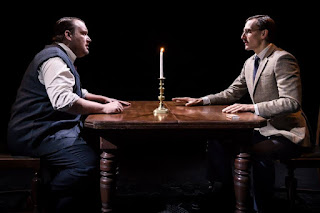 David is accused of passing blueprints for the atomic bomb to the Russians, and when arrested he names Jakob as the one who introduced him to his contact, with Esther being implicated on the dubious grounds of possibly having been in the room when the treason was discussed. As FBI Agent Cranmer (Stephen Billington) doesn’t even try to disguise, the plan was the usual McCarthy technique of expecting the Rubensteins to sell out someone higher up in the food chain in return for a reduced sentence, but the pair continue to deny everything and end up executed. Their story alternates with scenes in 1975 when their son Matthew (Dario Coates,) under an assumed name, joins a campaign to clear his parents’ names posthumously. 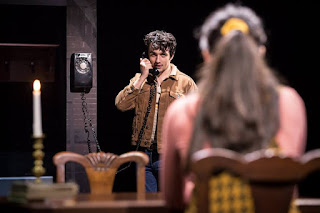 For a story that should play out as a Cold War thriller, this is almost impressively dreary. The lack of pace is something that can be laid at most of Joe Harmston’s production - the fact that the estimated running time on the website went up by 25 minutes after press night speaks volumes in itself – but even if Phillips’ plotting for them is heavy-handed, the scenes between Coates’ Matthew and love interest Anna (Katie Eldred) do at least have a bit of life to them. So unfortunately I have to mainly point the finger at the central couple and their lack of chemistry. The play’s title refers to the final photo of the Rubensteins together, when they grabbed a last kiss before being taken away to their separate executions, suggesting passion is at the heart of the story. It’s not a passion that’s felt though, in each other, in their belief in communism, or even as their deaths approach. 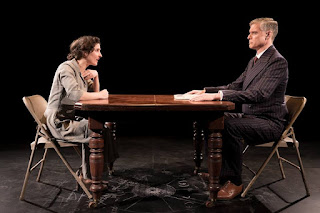 As well as the livelier 1970s scenes things also livened up every time there was the sudden noise of someone in the audience falling asleep and accidentally kicking their drink over, something that happened more than once tonight. And Sean Cavanagh’s traverse design means you can keep track of who in the opposite seating bank will nod off next, except when it’s you. The design focuses on an old table that does turn out to be central to the plot, but which stays at the centre of the traverse throughout, meaning a lot of scenes end up restricted to one half of the stage or the other. A lot of the issues do seem to be in Phillips’ script which favours exposition over character, but the production does little to fight them. It’s probably for the best that we don’t actually see the Rubensteins’ executions; I might have cheered.

The Rubenstein Kiss by James Phillips is booking until the 13th of April at Southwark Playhouse’s Large Theatre.