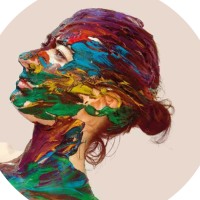 I think any attempt for me to see It's True, It's True, It's True live is cursed: After hearing nothing but raves for Breach Theatre's show I snuck a performance into a packed schedule when it ran at the New Diorama, only to get bronchitis and have all my theatregoing go out of the window for a few weeks. It recently spent a month available on iPlayer but I didn't watch that because I'd booked to catch its return to London for a run at the Pit; well I was due to have seen it this week, so we all know how that worked out. Now the company have put it online for another month on their YouTube channel, and let's hope finally managing to see it will break the run of bad luck. The title comes from the repeated testimony of 17th century painter Artemisia Gentileschi (Ellice Stevens) in a rape trial where she was the key witness, but it also describes the piece itself, which Stevens and director Billy Barrett have translated into vernacular modern English from the almost-complete transcripts of the 1612 trial in Rome.

Agostino Tassi (Sophie Steer) was Artemisia's painting tutor, a friend of her father's and a favourite painter of the Pope's. After insinuating his way into the family's life he got the 15-year-old alone and raped her, later promising to marry her to save her from shame. When, two years later, he still hadn't kept his promise, Artemisia risked that public shaming and filed rape charges against him, leading to a scandalous trial. 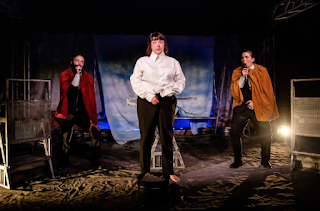 The core cast of three is rounded out by Kathryn Bond, who primarily plays Artemisia's neighbour and guardian Tuzia, a woman whose tendency to take men at their word is gradually taken down by the girl's compelling case; but all three women take turns as lawyers and judges interrogating each other. The play is subtitled Artemisia on Trial, and it feels depressingly predictable not just why that title makes sense, but how it ties in to the 17th century story feeling topical: Of course despite it being Tassi on trial it feels throughout at if it's his accuser who is, being forced to relive her ordeal repeatedly despite never wavering from her testimony while her abuser is never pushed on the holes in his story. Even the fact that she was tortured to see if she stuck to her version of the story feels grimly predictable, although the fact that Tassi was permitted to personally torture and question her (in an effectively-staged scene featuring gold paint) is where the twisted priorities really reach shocking levels. 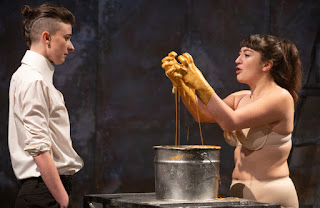 It's True, It's True, It's True shows Artemisia as a fearless, badass, totally modern heroine ripped verbatim from history, but what kicks it up a notch is the way it also argues for her position in the history of art. The courtroom setting is occasionally left behind for the cast to recreate some of her paintings, and demonstrate the way she channelled her pain and anger into her work; as well as a kind of common sense physicality - the effort needed for Judith (Harriet Webb) to decapitate Holofernes in what would become one of her most-visited subjects - that went against more romanticised portrayals at the time, and has led to her work remaining relevant and admired to this day. Tassi's punishment turns out to be predictably underwhelming, but Artemisia emerges satisfyingly triumphant regardless, making this a piece that despite going to some distressing places ends up empowering. Finally catching It's True, It's True, It's True it lives up to the praise it's had - although I hope Breach will forgive me if I'm nervous of booking for their future offerings, for fear of what Horseman of the Apocalypse it might unleash next time.