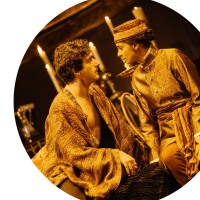 Christopher Luscombe's Shakespeare productions tend to have a touch of the Merchant/Ivory to them, and so it is with this 2017 production of Twelfth Night, one of the few productions of the RSC's current run through the complete works that I'd missed until now, when it's just been added to Marquee TV's roster. Simon Higlett's set and costume designs are of a sumptious, solid kind a thrust stage like the RST rarely seems to need or bother with, and Nigel Hess' music is used like a movie score, much like he and Luscombe experimented with a decade earlier in their Merry Wives of Windsor for the Globe. The period movie they're making here is a Victorian one, where Shakespeare's fictional Illyrian coast becomes London and the countryside, by now comparatively easily accessible by train.

Also more accessible is the wider world, and with the British Empire firmly established in India, the influence of the subcontinent is seen back in England, and a number of the wealthy characters have Indian servants; so when Viola (Dinita Gohil) is shipwrecked and believes herself the only surviving member of her family, she sees disguising herself as a man and going into service as a sensible plan. 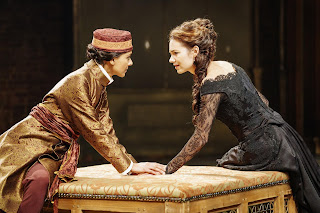 But when working for Orsino (Nicholas Bishop) she finds herself falling for her new employer, made more awkward when he gives her the task of wooing Olivia (Kara Tointon) on his behalf, only for Olivia to fall in love with Viola's male alter-ego instead. Luscombe's Victorian relocation contrasts a couple of very different popular images of the period: Olivia's household is very much one of Dickensian grotesques, John Hodgkinson's bombastic Sir Toby Belch soon revealing himself to be a pretty cruel bully, particularly to his sidekick, Michael Cochrane's frail and doddering Sir Andrew Aguecheek. Maria (Vivien Parry) is at times a dementedly overdramatic housekeeper, while Adrian Edmondson overtly channels Ebeneezer Scrooge in his Malvolio. 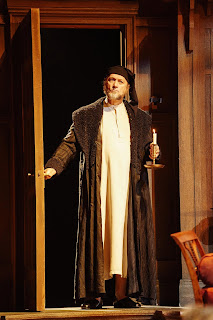 Orsino's world on the other hand, leaning into the homoerotic side of his storyline, is much more that of Oscar Wilde and his circle, our introduction to him as he paints a near-naked Luke Latchman referencing Dorian Gray (as well as being the kind of character introduction I can only enthusiastically approve of.) The story's gender-bending queerness is something the production keeps in mind throughout, and by the end when the story resolves itself into two couples there's a question mark over whether Orsino and Olivia in particular have ended up with the twin they truly wanted; it's just a shame the unfortunate combination of two rather wooden leading ladies means the Viola / Olivia relationship is hard to care about. 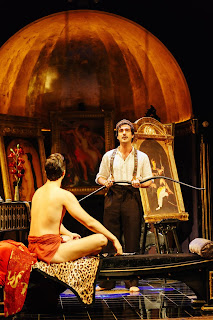 More successful in terms of showing a character being othered is the treatment of Feste (Beruce Khan,) also played as an Indian servant, and the theme of the fool who always seems on the verge of wearing out his welcome gets an undertone of a man in a foreign country who could be out on the streets if the novelty of employing him wears off. A late addition to the gulling of Malvolio, Feste also remains the least sympathetic and contrite after it goes too far, and Khan plays him particularly vicious to the steward even after he's been released. There seems to be an element of him having put into Malvolio a lot of his anger at the way he's treated more generally, but this is something I had to read into it and could have done with being hinted at more clearly earlier. 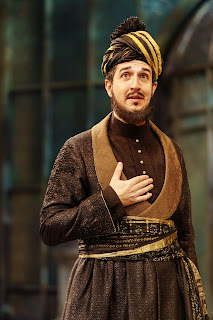 If I have a lot to say about the way a Twelfth Night treats the themes of othering, queerness, music and melancholy in the play, it's probably not the most encouraging sign of how the comedy plays, and indeed Luscombe's production never really takes off, with a lot of its setpieces feeling a bit forced. Cochrane gives probably the funniest performance, no mean feat with a character so prone to be tedious as Sir Andrew; it could of course be that the overall atmosphere hasn't translated well to the screen, but from the cheers at the bows it would seem Cochrane was by far the favourite of the audience on the night as well. 2017 was meant to have been a year when, after a surprisingly long gap, three productions of Twelfth Night came along, but illness made me miss two of them. The only one I caught in the end was Simon Godwin's at the National*, and I think I was lucky to catch the right one that made the play genuinely funny again. This one, though it features a lot of well thought-out elements and twists on the usual ways of staging the play, is one for the pile of productions that, though not without merit in inhabiting the play's darker side, doesn't touch enough on its lighter one.

Twelfth Night by William Shakespeare is available on Marquee TV, which has extended its free trial period to 30 days for the duration of the public health crisis. Their collection of RSC productions also includes Hamlet, The Tempest, The Two Gentlemen of Verona, Richard II, Titus Andronicus and others, and you can find reviews of most shows in their theatre library on this blog.

*also due to get an online showing in a couple of weeks' time and highly recommended
Posted by nick730 at 18:14