Stage-to-screen review: What the Butler Saw 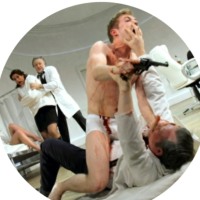 A second virtual trip to Leicester, where the Curve Theatre has actually been ahead of the curve so to speak as one of the first venues to get its online alternative to live performances up and running. As with Memoirs of an Asian Football Casual the next show they've made available has a Leicester connection, as it was the birthplace of Joe Orton (I don't think he had much good to say about the place, but in fairness he was Joe Orton, he didn't have much good to say about anything.) What the Butler Saw was his final play, in which he delivers every beat of the perfect farce while breaking all the genre's unwritten rules. The setting is the Hampstead mental health clinic run by Dr Prentice (Rufus Hound) and his wife, and as the curtain rises the doctor is "interviewing" prospective secretary Geraldine (Dakota Blue Richards,) a process which involves making her strip for a medical examination with a view to sexually assaulting her.

He's interrupted by the return of Mrs Prentice (Catherine Russell,) who has herself just been assaulted in a hotel linen closet by bell-boy Nicholas (Jack Holden,) who's now blackmailing her with incriminating photos. 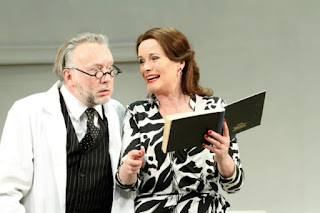 With them having long since given up caring about their marriage they probably could have brushed all this under the carpet were it not for the arrival of government inspector Dr Rance (Jasper Britton,) supposedly there to assess the clinic but actually hell-bent on getting as many people as possible, preferably including his fellow doctors, committed as insane themselves. I mentioned last year when Noises Off was revived that it's interesting to me how the two most beloved and enduring English farces are in fact meta-farces, and that Frayn's play is all about exposing the mechanics of the genre and the terrifyingly precise timing it requires. Orton's farce plays with the format in a much more subversive way, delivering pitch-perfect comedy while showing up how odd it is that a genre viewed as a cosy staple is built on twisted sexuality, abuse and insanity. 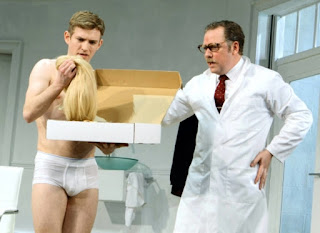 So Orton wastes no time in throwing in casual, unapologetic references to rape, incest and paedophilia, even building much of his plot and humour around them. It works even in a very different society than when the play premiered in 1969 (when in fact it drew boos) not just because it's so clearly holding a tired format up to exposure but also because the gags, whether the darker ones that are pure Orton or the sillier ones that would be at home in any sitcom, are just so good. And the cast in Nikolai Foster's production absolutely rattle through the many lines and frantic action, really drawing the laughs out. 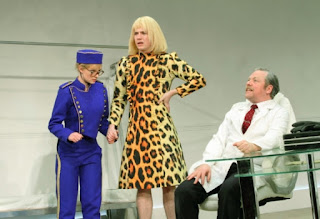 This is particularly impressive given the recording: While not bad, exactly, certainly for a show being streamed for free (donations are of course welcomed,) it's the first of the lockdown theatre I've seen so far to really live up to what I would expect of an archive recording: A single-camera shot of the stage from the back of the stalls, the view is fine but the sound quality leaves something to be desired - the recording is captioned, which I actually found useful at times despite turning my PC's sound up as far as it would go. (In a way it's a pretty authentic theatregoing experience, in that sometimes the audience's coughs and whispers are more audible than the cast.) And yet the comedy is so well-timed and delivered that even with the punchlines showing up on screen a little before they get delivered I still laughed a lot. 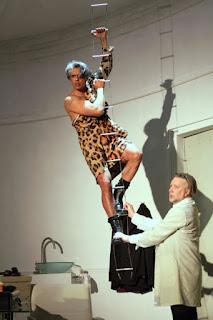 What the Butler Saw isn't a play to be tinkered with, and Foster and co don't: By delivering the comedy straight it works both on the level of pure entertainment and in skewering many holy cows (not least of all Winston Churchill, whose cock and balls form a major subplot, and who having only been dead four years when the play premiered may well have been what caused all those audience boos.) Rance is a vicious pisstake of Freudian psychiatry with his ghoulish enthusiasm for imagining sexual trauma in everyone's past, but as the highest-ranking representative of the Establishment his disgust as Geraldine, Nicholas and eventually a police sergeant (Ravi Aujla) repeatedly end up stripped* and cross-dressing comes to represent a lot of society's judgment of sexuality and gender, a satire that still feels current. If online theatre is there to give people a pick-me-up in dark times this offering has to be one of the most effective.

What the Butler Saw by Joe Orton is available for the duration of UK lockdown on the Curve Theatre's website.

*am I disappointed that the lovely Jack Holden keeps his y-fronts on for a particular scene? Look, all I'm saying is that I've seen the play on stage twice, and both David Tennant and Nick Hendrix took the reference to Nicholas showing his policeman's helmet fairly literally
Posted by nick730 at 22:16