Another regional theatre uploading an archive production online to fundraise while the doors are closed, and another grungy show to contrast with the slick offerings from the likes of the West End, National and RSC, this Henry V comes courtesy of the Barn Theatre in Cirencester, with Hal Chambers' production consciously using the ambiguity of Shakespeare's patriotic hero to reflect on the rise of populist, xenophobic politics in the 21st century. In a frantic opening, speeches from this play and the Henry IV ones preceding it are mixed with soundbites of frothing Brexiteers on Question Time, and the wild past of Prince Hal is referenced with real headlines about the current Prince Harry's party lifestyle. That Prince Harry has in recent years shown a more serious side, and so too does Shakespeare's Hal, now King Henry V (Aaron Sidwell), put on a much more serious face once he's running the country.

Although how mature it actually is to launch your reign with an unnecessary war with France, based on a spurious claim to territory, risking the lives of your people for a chance at your own glory, is another matter; Sidwell's is definitely the kind of Henry who leans towards the cold manipulator view of the character, rather than the straightforwardly heroic icon. 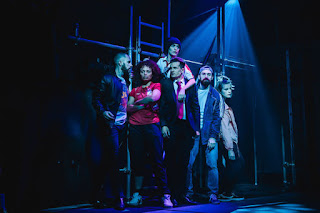 Chambers' production sets out its stall as a brash, loud and modern affair with its busy opening scenes, and the archive recordings have tried to reflect that with a lot of shaky camerawork that fortunately calms down after a while. Emily Leonard's set design is essentially a simple one of scaffolding, ladders and trapdoors, with Ben Collins' projections doing most of the work of setting the scene, reimagining some of the meetings between kings as televised press conferences, and referencing a 24-hour news cycle ramping up the pressure for war. Like many high-concept productions this quiets down after a while, and as is often the case that's when it starts to come to life. 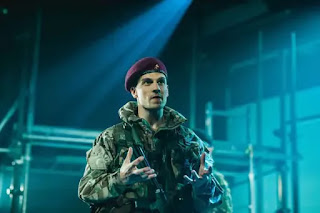 The early scene of Henry confronting the three lords who betrayed him is one that can go either way, but is here undoubtedly one of my personal highlights of the production; it's got a nasty underlying tension that this utterly charming Henry would very easily slip into the role of military dictator, and the cat-and-mouse game he plays with the traitors is backed up by ruthless brute force. His famous scene in disguise the night before battle is supposed to be him getting into the heads of his troops but in reality it's him planting more spin about how he's in the right; at the best of times I find something chilling to the ease with which Henry dismisses, to their faces, any suggestion that he might bear responsibility for what happens to ther men he's chosen to lead into war. One notable change Chambers makes to the script is the killing of the prisoners coming before that of the boys, making Henry's war crime an act of sheer brutality rather than revenge. With the focus on Henry's cynical power grabbing and disregard for his own people it's easy to see the modern parallels in everything, with even the usually charming scene of him "wooing" Lauren Samuels' Katherine carrying echoes of a bumbling Boris putting on a comic façade to distract from the bloodshed that got him there in the first place. 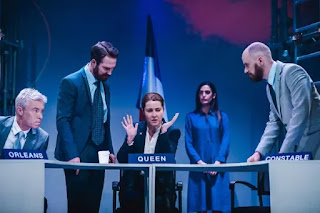 Elsewhere, there's an interesting choice to replace Alice in Katherine's comic "English lesson" with the Dauphin (Jonathan Woolf,) Matt Ray Brown's Exeter is less the trusty old advisor and more the sensible-seeming front for the king's hot-headedness, and there's been some mercifully brutal cutting of most of the faffing about with gloves and leeks in hats that nobody's really in the mood for after a load of battle scenes. The production is generally more successful in portraying the kings and generals than it is with the common soldiers, who don't really build much personality and whose subplots never come to life. And while the battles have some interesting staging I can tell that if I was actually watching this is the theatre I wouldn't have seen much of it, as this is one of those shows that goes so nuts on the flashing lights I would have spent much of it with my eyes closed to avoid a headache. And while there aren't too many technical issues despite the fairly rough-and-ready filming, it's unfortunate that a major sound issue (which seems to be the soundtrack from two separate recordings of the show playing over each other) comes right at the St Crispin's Day speech. Still, a welcome addition to the growing online theatre archive for quarantine; Henry V is one of those Shakespeare plays I tend to only like in parts, and that was the case for this production as well, although in this case sometimes the scenes which stood out were unexpected ones.

Henry V by William Shakespeare is available on the Barn Theatre Cirencester website.