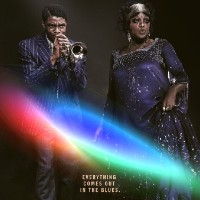 Among the many instances of time seeming to move unpredictably lately is the realisation that the National's production of Ma Rainey's Black Bottom was exactly five years ago; the fictional story of the real-life "Mother of the Blues" who weaponised diva behaviour feels much more recent to me than that. The 1920s instalment of August Wilson's Century Cycle (better known as the Pittsburgh Cycle, except for the fact that this one play isn't set there) has been one of the more notable stage adaptations for the screen in recent months, unfortunately notable in large part for being Chadwick Boseman's final onscreen role. He plays Levee, horn player for the superstar singer, and the most cocky, vocal and jumpy member of the four-strong band waiting in a rehearsal room for her to arrive and begin recording an EP of some of her most famous songs. This includes the one which gives the play its title, and for which Levee has prepared a new arrangement.
Whether they'll use this arrangement or not becomes one of a number of bones of contention between Levee and Ma, band leader Cutler (Colman Domingo,) Ma's manager Irvin (Jeremy Shamos) and Sturdyvant (Jonny Coyne,) the white record label owner bankrolling the recording, and who will ultimately profit the most from everyone's work. 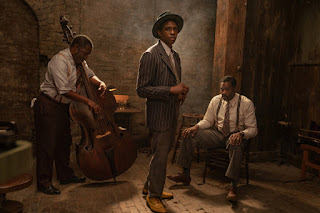 With the title character being a veritable force of nature, Viola Davis is a natural casting choice and one who reliably steals her every scene; with George C. Wolfe's film running much shorter than Wilson's original play it feels more evenly matched between her character and Boseman's - in the play Wilson limits the time the audience can spend with the star, and makes us wait, like the band, for her first entrance, whereas Ruben Santiago-Hudson's screenplay gives us a prologue showing live audiences' reactions to her. This also lends some background on black workers from the Southern states moving to Chicago for work, and bringing their love of Ma's music with them; it helps set up one of the central conflicts, of Ma happy to play to her loyal fanbase while Levee wants their music to evolve and pick up new audiences. 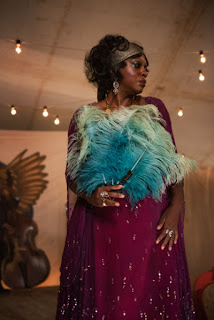 Less effective at making the move from stage to screen is the fact that much of it takes place in a single small room, although Boseman, Domingo, Michael Potts and a scene-stealingly endearing Glynn Turman bring enough life and vibrancy to their characters to make you forget it for much of the time. But despite Boseman's powerful delivery, in the more naturalistic medium of film, Levee's speech revealing the extent to which his abrasive personality is a reaction against his experiences growing up black in America feels like a plot contrivance in a way that's easier to look past on stage. 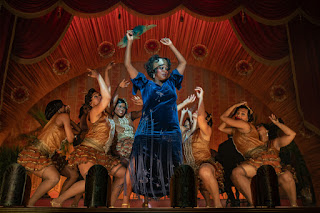 And while Davis is as explosive as you'd hope, seeing her lip-sync to the songs inevitably doesn't have the same power as seeing someone perform them live on stage; while I also don't think Santiago-Hudson's screenplay entirely conveys the way her segments of the story parallel Levee's in the way that her diva behaviour is a conscious little rebellion of her own against the treatment any black woman not in her unique position of power would experience. Wolfe's film is entertaining with powerhouse performances but as a stage-to-screen adaptation is only partially successful - neither leaving the story's stage origins behind entirely, nor managing to explore all the depth and layers of the original.
Ma Rainey's Black Bottom by August Wilson, adapted by Ruben Santiago-Hudson, is streaming internationally on Netflix.
Running time: 1 hour 35 minutes.
Photo credit: David Lee / Netflix
Posted by nick730 at 18:06