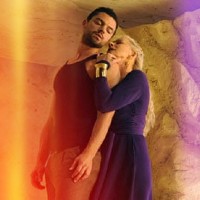 A new year starts much as the old one ended, in lockdown and with theatres trying their best to remain not only above water financially, but alive in the public's minds. Most high-profile has been the National Theatre, which late last year launched a major new international streaming platform, NTatHome. Of their initial selection of shows available, I've already seen everything except their kids' offering I Want My Hat Back, but if I was going to revisit one I'd already seen and reviewed, Nicholas Hytner's Helen Mirren-starring production of Phèdre would seem the obvious choice: It dates from 2009, making it the oldest recording currently on the service, which means that with over a decade since seeing this live I can treat it more or less with fresh eyes (all I really remembered was that Dominic Cooper's attempt to give "Phèdre" the correct French pronunciation ended up with him repeatedly calling the leading lady "veg.")
This was also the first production to be broadcast to cinemas via NTLive, starting the library of good-quality recordings that allowed the NT to launch this service in the first place; it also means the opportunity to see much-missed actors like Margaret Tyzack and John Shrapnel on stage again. 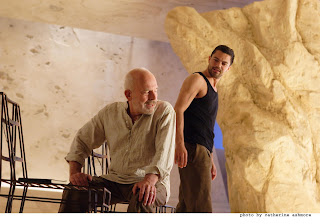 Racine's take on Greek myth takes place in Troezen in the Peloponnese, a small state ruled by Theseus, better known as king of Athens; he seems to more or less treat it as a cross between holiday home, and place to send any family members he'd rather not have to deal with. This now includes his wife Phèdre (Mirren,) stuck there with her stepson Hippolytus (Cooper,) whom she'd asked to have exiled there in the first place. When rumours suggest Theseus is dead, the throne of Athens is up for grabs, with Hippolytus, Phèdre (as regent for her young son) and Aricia (Ruth Negga,) last descendant of Theseus' great rival, all candidates. But none of them are as concerned about their political futures as they are about their personal ones - with Theseus out of the way Hippolytus declares his love for Aricia. More shockingly, his stepmother Phèdre confesses she's always loved him. 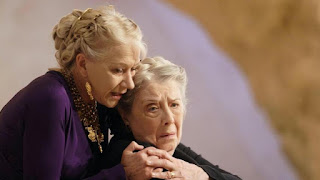 These confessions prove premature when it turns out Theseus (Stanley Townsend) is still alive after all, but the genie's been let out of the bottle and to protect herself Phèdre turns on the man she's lusted after for years, as well as her beloved nurse Oenone (Tyzack.) This is an interesting choice to have been the pilot for the NTLive scheme (albeit Mirren's star power was probably a bigger factor in choosing it than the suitability of the show itself) as watching it on screen makes a certain coldness in Hytner's production all the more apparent. Ted Hughes' translation of Racine is a fairly formal one, which the actors deliver in a declamatory style. 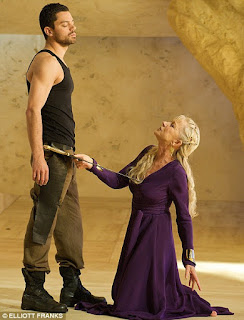 This is all clearly deliberate; Bob Crowley's designs are all contrasting colours and heightened artificiality, the cave-like set bordered by an improbably blue sky, like a Greek island postcard whose idyllic setting hides something much darker underneath. It's always interesting but rarely really goes in for the emotions, nodding perhaps at the way the characters' strongly-protested feelings are easily forgotten as they're put to the test. Still, Shrapnel's climactic speech describing the bloody consequences of Theseus' quick burst of rage remains entirely absorbing, with the whole cast delivering strong, albeit stylised performances.
(Trivia of the sort you couldn't possibly know at the time: This production was where Cooper and Negga first met, and they ended up dating for several years, then co-starring in Preacher.)
Phèdre by Jean Racine in a version by Ted Hughes is available to stream internationally via NTatHome.
Running time: 2 hours 10 minutes.
Photo credit: Catherine Ashmore, Elliott Franks.
Posted by nick730 at 17:03