In January, You Stupid Darkness! imagined a world assailed by an invisible, unknowable enemy, where we couldn't leave the house without protective equipment. What will these crazy playwrights think of next? No really, tell me, I could do with the warning. I usually end every year with a review of the best and worst theatre I saw, interspersed with me being a bit smutty about men who got their kit off, and giving out some dubious award to people or shows that amused or horrified me. Well, I think we all know why 2020 might not be too much fun to recap in any great detail; with theatre all but shut down from mid-March onwards it should also be obvious that I don't have many shows to pick from, and there's something vaguely patronising about trying to make up a Top Ten, never mind award an earth-shatteringly important title like Best Nipples, out of the 42 live shows I did manage to squeeze in. That said, a couple of shows in those first two-and-a-half months did make strong entries in certain categories, and theatres' attempts to keep something going both for audiences and their own survival were downright heroic.
So much as there's a lot of 2020 we'd all be happy to forget it'd be unfair to ignore those things worth remembering; I'm going to have a go at a different, much shorter review of the year than usual, and see what happens.

WHEN 2020 WAS BUSINESS AS USUAL

So the year started much as any other, and in fact the very first show I saw made an immediate play for an award, as Ben Stones' design played with the candlelight of the Swanamaker to make the opening of Swive [Elizabeth] a twist on the chocolate box prettiness associated with the venue.
THE MATT SMITH PISSING HIMSELF AWARD 2020
FOR ASTONISHING COUP DE THÉÂTRETM OF THE YEAR:
A backdrop that looked like the Swanamaker stage being removed
to reveal the real stage had been covered in chipboard for Swive [Elizabeth] 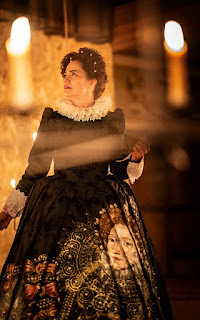 2020 goes down as the first year in over a decade that I didn't see a single Shakespeare play live, but early in the year there was a certain amount of playing around with his work and his contemporaries': Teenage Dick relocated Richard III to an American high school, Rebecca Frecknall's production somehow got away with playing The Duchess of Malfi straight, while The Revenger's Tragedy wasn't Cheek by Jowl's best-ever show but it did provide some of the trademark camp flair. Likely to be the most enduring twist on Shakespeare, and already planning its post-lockdown return, is the wildly silly and heartwarming & Juliet, surely the apotheosis of the jukebox musical. Other classic writers whose work got a radical makeover were Ibsen, with Stef Smith's Nora: A Doll's House very satisfying, and Rostand, whose Cyrano became one of the winter's hottest tickets when Jamie Lloyd turned it into a rap battle. 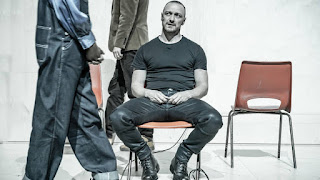 In new work, Janice Okoh's The Gift was a witty look at the legacy of Britain's colonial past and a little-known figure from the Victorian era; this colonial past also raised its head in The Whip, and in The High Table's argument that Empire poisoned Nigeria's attitudes to sexuality. Pass Over dealt with police violence against black Americans, a few months before what would become one of the other major narratives of 2020, while Tom Stoppard delivered what he thought might be his final work in Leopoldstadt, his epic of the 20th century Jewish experience. Serious subjects carried through to the major revivals as well, but with Caryl Churchill's undeniable flair with powerful productions of Far Away and A Number. 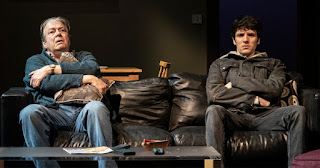 Lighter fare was provided by the ever-reliable Mischief Theatre, whose Magic Goes Wrong was an early highlight, and while my suspicions that Pretty Woman would be a half-hearted cash cow were proven correct, Be More Chill came along to provide a much more original and likeable musical, as well as another entry for my annual awards:
THE PIPPIN MEMORIAL AWARD FOR ENDEARING WHATTHEFUCKERY:
Millie O'Connell's disturbing Hallowe'en costume in Be More Chill 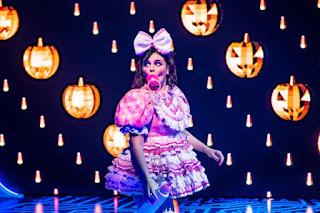 With live theatre stopping in March it was mostly too cold for anyone to be getting their kit off this year (although once we were all stuck at home it was at least nice of TV to make up some of the slack with the likes of Normal People and Industry doing their bit to flash some Schlongs From Slightly Less Far Away.) Still, my last pre-lockdown show was a revival of clothing-averse play The Mikvah Project that I thought superior to its premiere; and what the hell, let's give out one more award for things actually seen live:
THE CAPTAIN TIGHTPANTS AWARD 2020:
Denholm Spurr in No Sweat 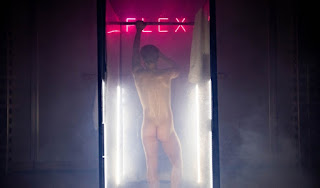 WHEN 2020 WAS NOT BUSINESS AS USUAL AT ALL

Much later, much shorter and much more half-hearted than it should have been, lockdown did arrive in March and with it theatres having to try and survive, both financially and in terms of keeping themselves in the public consciousness. A few existing subscription services like Marquee TV were poised straight away with archived productions like An Ideal Husband, and over the course of the year more would spring up, including the National Theatre launching an international streaming service to help pay their freelancers. Before that they offered up NTLive recordings for free for a limited time, giving me a chance to revisit my 2019 show of the year, as well as a couple of regional shows I hadn't seen before like Nottingham Playhouse's The Madness of George III. 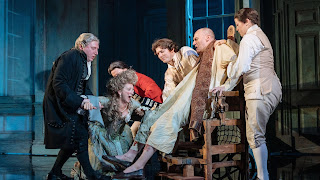 Other venues made individual shows available on YouTube, meaning I finally got to see the much-lauded show I seemed doomed to keep missing, It's True, It's True, It's True, as well as one of the Globe's schools productions, the Playing Shakespeare Macbeth. Punching above their weight in terms of providing online content were the Finborough, whose offerings included Jane Clegg and It Is Easy To Be Dead, and Leicester Curve who were among the first out of the gates with the likes of Memoirs of an Asian Football Casual, What the Butler Saw and My Beautiful Laundrette. The closest thing streaming came to creating event theatre has to be the Old Vic premiering Three Kings, a new monologue I suspect Andrew Scott will keep in his repertoire once theatres reopen.
Meanwhile Philip Ridley seemed to be trying to fill the theatrical vacuum by himself, responding to the cancellation of his new show with a series of specially written monologues called The Beast Will Rise (reviewed here, here and here,) followed by The Poltergeist, meant to be seen by both live and online audiences, but not quite working out that way. Which brings me to...

At the end of the first lockdown, social distancing measures were judged enough for theatres to reopen; in practice that meant only places that had both the auditorium size and the financial resources to significantly cut down their audiences could do much about it, but the Bridge fulfilled both those categories and got straight to business with a series of monologues including Beat the Devil, An Evening with an Immigrant and Nine Lives. They even managed to put on a small-scale but starry adaptation of A Christmas Carol (the show that dominated Christmas schedules, I'd like to say for its highly topical politics but probably more for convenience,) before things went tits up again. 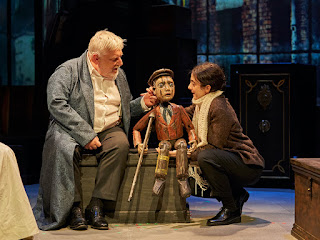 I also managed to sneak in live trips to Southwark Playhouse for The Last Five Years and Hampstead for The Dumb Waiter, while the National managed to create an event across the year: It had an early hit in Death of England, and during lockdown its writers Clint Dyer and Roy Williams wrote a sequel, Delroy, which explosively launched a reconfigured Olivier. 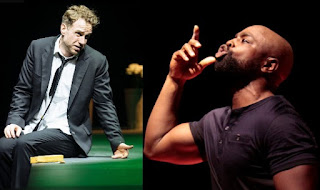 A mix of live audiences and live streaming was the answer for some theatres - that's how I watched possibly the first professionally-produced play about this particular lockdown, James Graham's Bubble, as well as a Chichester revival of Sarah Kane's Crave. It was how I was meant to watch the Hope Mill's Rent, but that got replaced with a pre-recorded stream: Yes, after having to be forced kicking and screaming to give any money to theatres, then finally doing so under the contractual obligation that they get their arse publicly kissed in return, and having the money spent on security measures so that the venues could start making their own money again safely, the Government decided that actually no, theatres should close. And then they did it again. And then they did it again. A number of the shows mentioned above had to close as soon as they'd opened, as did Dick Whittington and Nine Lessons and Carols, both of which I ended up catching up on digitally. 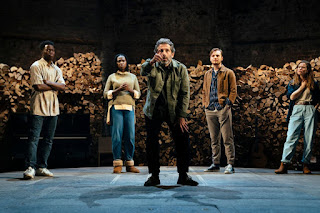 Which brings me up to date after a year that's been stressful and exhausting - even keeping this blog going has at times felt like a chore despite so many fewer shows to review, in any format, than usual. Like everyone I hope we can get back to something resembling "normal." We all know there's something different about the live experience, and based on the few live trips I've managed to make in recent months that hopefully includes my enthusiasm for digging into my thoughts on a show and sharing them.
Not every show I saw, in person or otherwise, was great; but even so nothing jumps out at me as bad enough to justify picking on a few to make a Bottom Five list, so while 2020 has been a stinker of a year, it's one that can take a break from having a theatrical Stinker of the Year. Similarly ranking a Top Ten out of comparatively few shows feels pointless, although a couple of those January-March shows would no doubt have shown up on the list in a normal year. But if I'm not doing numbers 10 to 2 I am doing #1: Because a little pure joy and silliness in our lives can help us through bad times; because when done right, theatre can do that like nothing else; because we need something to look back on and something to look forward to; and because whatever other things, bad or good, I've thought about theatre in the last 12 months, there's one show that's jumped to mind with no competition at all about what should be my Show of the Year. Who would have thought it would be a jukebox musical?
SHOW OF THE YEAR 2020:
& Juliet at the Shaftesbury Theatre I'm not sure when I'll start posting 2021 content - live shows will be a way off yet, and after the recent fuckups I can't see theatres spending money on new work in a hurry even if they're told they can reopen. I've got a couple of digital shows still to catch up on and a few more are probably going to pop up at some point. In the meantime all I can say to regular readers (both of them) is take care, stay safe, and Happy New Year.
Photo credit: Johan Persson, Marc Brenner, DeWynters, Ali Wright, Manuel Harlan, Helen Murray, Normski.
Posted by nick730 at 12:00

Email ThisBlogThis!Share to TwitterShare to FacebookShare to Pinterest
Labels: Year in Review