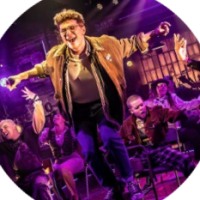 The latest leg of my virtual tour around the UK's theatres takes me to Manchester and the Hope Mill, where Blake Patrick Anderson and Millie O'Connell must be feeling particularly hard done by 2020 - their run in Be More Chill, which for Anderson in particular had been expected to be a star-making performance, got cut short by the first lockdown, and when they reunited for Luke Sheppard's revival of Rent it only lasted five performances before Lockdown 2: Emetic Boogaloo scuppered that as well. Intended to be a mix of socially distanced audiences with simultaneous live-streaming, with Manchester still barred from live performance even after lockdown lifted they've had to rejig the plan, and stream a recording of the final live performance of Jonathan Larson's iconic, none-more-nineties musical.
Loosely based on Puccini's La Bohème, Larson replaced Paris with New York and consumption with HIV to create his own group of new Bohemians, and that's something this production feels like it foregrounds more than any I've seen - David Woodhead's grungy design evokes Paris coffee houses as much as it does New York tenements. 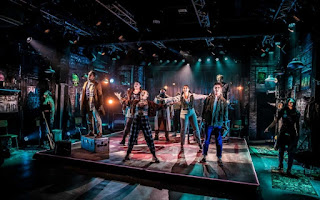 Anderson plays the unpreposessing filmmaker Mark, O'Connell his ex-girlfriend Maureen (She's got style! She's got pizazz! She's got a loyalty card for MECCA Bingo!) who he spends much of the first act moping over after she leaves him for Joanne (Jocasta Almgill.) On Christmas Eve both of Mark's flatmates start intense but probably doomed relationships - Roger (Tom Francis) with Mimi (Maiya Quansah-Breed,) a junkie who reminds him painfully of his own fight with addiction, and Tom Collins (Dom Hartley-Harris) with Angel (Alex Thomas-Smith,) physically slight but emotionally stronger than any of them. Linking them all is a fight with landlord and former friend Benny (Ahmed Hamad) over his plans to redevelop a neighbouring lot used by the homeless. 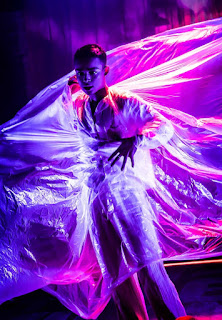 The productions of Rent I've seen have gone from one extreme to another (from the notorious Rent Remixed to the po-faced off-Broadway revival) which has left me with certain opinions on what does and doesn't work about the show in this country, and I think a quarter of a century on it benefits from a bit of distance from its own hype, and the mythology that grew around it thanks to Larson's death the day before it opened. I've always found that being too reverential over the tragic elements of the story tips it over into the unintentionally funny, but Sheppard's production finds the best balance I've seen yet between the high tragedy and the comically pretentious side of Larson's new Bohemians. I'm glad to see that the accepted reading now seems to be that, despite the utterly eranest way she's adored by the other characters, Maureen (Men want her! Women want to be her! Soreen want to discuss an exciting promotional opportunity!) is in fact a hilariously bad performance artist; but Sheppard's cast also have an archness to the other characters' pretensions of changing the world, which lightens the tone. It also, of course, helps humanise them, so their painful moments hit harder than if we're unironically hammered over the head with them. 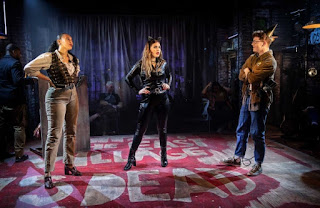 Hartley-Harris gets the best of this with a memorable rendition of "I'll Cover You" but there's no weak links in the cast - Francis here making a particularly strong professional debut, and Anderson managing to give some personality to the play's most wishy-washy character. Ironically, given that Larson foregrounding a trans character is admirably ahead of its time, nothing dates Rent quite as much as its utter confusion over Angel's gender identity and pronouns. But in most other respects this production, short-lived as it might have been in front of live audiences, points the way forward to the play getting past the Rent-mania that defined it in its very specific time and place, to the enduring classic it's becoming known as.
Rent by Jonathan Larson is streaming until the 20th of December from the Hope Mill Theatre (not available outside the UK.)
Running time: 2 hours 15 minutes.
Photo credit: Pamela Raith.
Posted by nick730 at 21:58