"It's not like Pinter where you can more or less say what you like so long as you leave enough gaps." 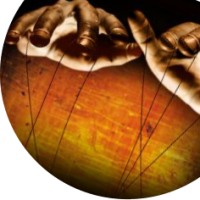 In what I suspect will be a pretty short window of time to catch live theatre in London before we get bumped up a tier, a classic Pinter makes a surprisingly swift return to the stage - it's less than two years since The Dumb Waiter was in the West End, but Hampstead Theatre were keen to mark the 60th anniversary of a show that premiered there in its own debut season. Planned to run last spring as part of the theatre's 60-year retrospective season, it does of course also feature a bubble-friendly cast of just two, with Alec Newman as Ben and Shane Zaza as Gus, a pair of mobsters who've been holed up all day in a basement room waiting for the instruction to carry out a hit on an unknown target. But when instructions do come, via the titular miniature elevator, they're confusing and increasingly extravagant food orders, seemingly intended for a restaurant kitchen that's long since closed.
So there's another obvious reason for The Dumb Waiter to feel like a timely choice for a country that's spent the year going in and out of lockdown - people stuck indoors all day, with the only voice of authority sending down confusing, contradictory and ever-changing instructions. 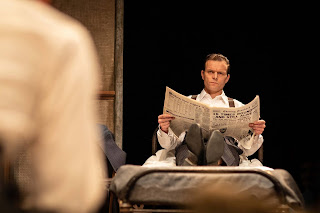 Needless to say I'm as excited as anyone for theatre to go back to normal, but of course "normal" will always include some disappointing productions and I'm afraid that's what we've got here. James Perkins' set is brilliant - a curtain surrounds the set, rising to reveal a claustrophobic polygonal room, like a jewel box you open to find only dust inside. The set, of course, would have been one aspect of the production that was ready to go when the theatre closed in March, and I can't help but wonder if everything else about the show had to get done at speed, because Alice Hamilton’s production feels in other respects under-explored. 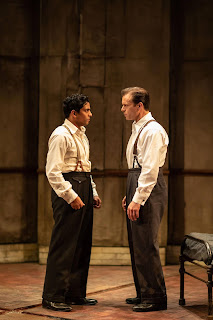 So the two hit-men's personalities don't feel anything like as distinct as I've seen before, while Giles Thomas' sound design doesn't manage to make the dumb waiter itself the third character in the play. I spent the whole time waiting for the menace and black comedy to kick in and neither really did - and without those is it even Pinter? It could of course be that I'm overfamiliar with the play - this will have been my fourth production in total and, as I say, my second in under two years - but I've never experienced such a muted response, to what is about as close as you get to a populist Pinter play, from the rest of the audience before either: Not many laughs, not much sense of tension, and the comments I heard as everyone left were very much nonplussed and in the "oh well, it got us out of the house" vein*. 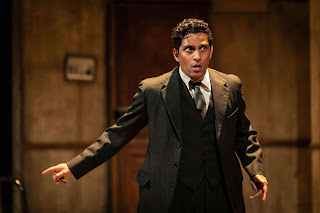 I've reviewed a lot of his plays before without referencing it, but for the first time I opened this review with Victoria Wood's famous gag about Pinter because for once it feels apt. In recent years theatremakers have talked a lot about how getting too caught up in the writer's famous pauses can derail a production, and I think that's what's happened here: There's a lot of silence but not much hint of what's going on underneath it, and it's led to no urgency; if there's no sense that failing to create a Greek platter out of a stale Eccles cake and a box of loose tea might be a matter of life and death, then the situation's neither farcical nor terrifying. An audience member behind me noted the similarities to Waiting for Godot on the way out, and while they are of course there, maybe this was my problem with Hamilton's production: It's Pinter staged as if it's Beckett, so I was never likely to connect with it.
The Dumb Waiter by Harold Pinter is booking until the 16th of January at Hampstead Theatre (lockdown tier changes permitting.)
Running time: 55 minutes straight through.
Photo credit: Helen Maybanks.
*you could blame the circumstances but I don't think so - I've been to a few socially distanced performances now and while the atmosphere is different it's certainly energised, and nothing like an auditorium that's half-empty because it just happened not to sell many tickets. Besides, Hampstead have done rather a good job of making you forget about the empty seats: The close-up posters of past stars that have long decorated the foyer and loos have been given a new job as seat-fillers, so your eye's never drawn to the empty space. (The seat in front of me was "occupied" by Moe Bar-El in Every Day I Make Greatness Happen, a show that made my Top 5 of 2018, so a reminder that this disappointing evening is hopefully just a glitch from Hamilton.)
Posted by nick730 at 21:57