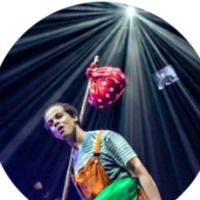 British theatres' biggest annual earner, the Christmas pantomime, attempted a limited return in those areas that were allowed to, before everything got promptly shut down again (it's OK though, the Culture Secretary and Prince William had already been very publicly allowed to take their families to one, so it's not like anyone who matters was being excluded.) In what is hopefully a one-off attempt to make up for something people were missing out on elsewhere, the National Theatre were one of the venues putting on a panto, with an updated version of a Jude Christian and Cariad Lloyd script for Dick Whittington first seen at the Lyric Hammersmith two years ago. When this too was put on ice, they put Ned Bennett's new production up on YouTube for a few days over Christmas (available for free internationally, which raises the possibility of people all over the world watching and being baffled by the British concept of wholesome family entertainment consisting predominantly of dick jokes.)
In theory the show is hoping to reopen to live audiences in the New Year after the next tier evaluation - as this would require London to be dropped a whole two tiers in the next week that seems too optimistic even for Whittington himself, but it will resurface online for a few weeks on the National's new paid streaming service. 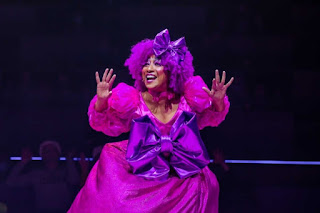 In the meantime it offers a chance for a Boxing Day panto trip of the virtual kind, and in the panto with the most obvious source of smutty double-entendres Dick (Lawrence Hodgson-Mullings) arrives in London where he's promptly robbed, but finds a friend in Tom Cat (Cleve September) and a love interest in Alice (Georgina Onuorah.) With a little magical assistance from fairy Bow Belles (Melanie La Barrie) he's encouraged to run for mayor of London, to stop the wicked Queen Rat (Amy Booth-Steel) from winning by default. 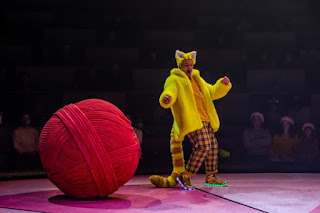 Audience participation and atmosphere are a huge part of panto so a home version will suffer even more than most of the screened theatre we've seen this year, but Christian, Lloyd and Bennett make a good stab at it with a script that's heavy on the topical references - both as political digs for the adults in the audience, and to provide a bit of necessary hope that everyone can pull together. The hardest job is surely that of the younger cast members: Like many panto leads the characters themselves are pretty bland and would normally depend on the actors' charm and energy to give them life; but with not only the audience but also the cast having to socially distance from each other, Dannielle 'Rhimes' Lecointe's choreography has to by definition be very precise and separate, so there's not much chance for them to really go crazy. 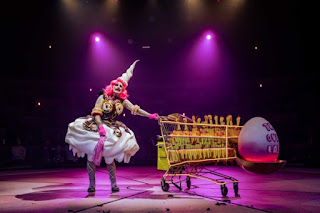 The more reliable scene-stealers are easier to adapt to the circumstances; Booth-Steel's Queen Rat is essentially an endless stream of fart gags for the younger kids, and La Barrie's impressive voice adds power to the musical numbers. As for the adults, there is of course the dame, with Dickie Beau as Sarah the Cook delivering the smutty one-liners, while a rewrite of Gilbert & Sullivan's "I am the very model of a modern Major-General" has an edge of genuine, justified anger at the deliberate impenetrability of government advice on Covid. With a genre traditionally staged on Victorian proscenium arches with colourful backdrops being moved to the Olivier's temporary in-the-round formation, designer Georgia Lowe focuses on the costumes to get the cartoon visual across but there's a lot of clever little staging touches that bring it to life as well - even making a couple of Wacky Waving Inflatable Arm Flailing Tubemen appear out of the stage. 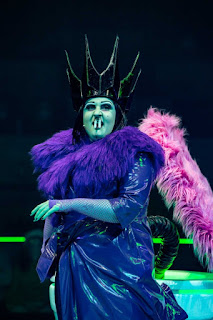 Even by theatrical standards panto is a particularly communal experience - its often-stated importance to the UK's theatre landscape isn't just in the money it usually rakes in that can keep a venue afloat for the rest of the year, but also in turning kids into the next generation of theatregoers. You can't replicate the excitement tinged with nervousness that the dame might pick on you, in a prerecorded performance on your TV, but while Dick Whittington can't work miracles it does bring some of that particular festive flavour into the home.
Dick Whittington by Jude Christian and Cariad Lloyd is currently booking from the 6th to the 23rd of January at the National Theatre's Olivier, subject to lockdown tier changes; available until the 27th of December to stream on YouTube; and will be available to stream on NTatHome during January.
Running time: 2 hours 5 minutes.
Photo credit: The Other Richard.
Posted by nick730 at 17:15