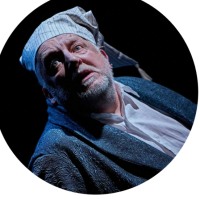 For what is almost certainly going to be my last live theatre visit of the year (I have two more booked but Tier 3 will put paid to them,) it's a story that always shows up a lot around this time of year, but this Christmas, with short lead times and the need for something straightforward and familiar, has been pretty much ubiquitous - or would be if the theatres weren't closing again the minute the shows opened. Maybe the two are connected, and the government's renewed vendetta against theatre is something to do with the popularity of a story that might as well be subtitled "All Tories Are Guaranteed Eternal Damnation," who knows? Out of many options the version of Charles Dickens' A Christmas Carol I chose was Nicholas Hytner's at the Bridge - it's one of the easier theatres for me to get to, but more importantly the cast includes a Future Dame in the form of Patsy Ferran, and a current one in Simon Russell Beale.
They're joined by Eben Figueiredo for a storytelling theatre take on the Victorian miser Scrooge, the consequences of whose contempt for his fellow man are brought home to him by a supernatural visitation. 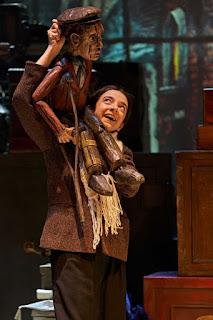 Primarily the trio serve as equal narrators, using Dickens' original words and bringing his characters to life. Rose Revitt's designs are based in the present day but gradually overlaid with the usual Victorian trappings; it's far from the most urgent reminder I've seen of the angry politics under the cosy story, but at least it doesn't entirely let the audience off the hook of remembering this is a tale with present day significance. SSRB is a rather avuncular choice to play Scrooge, his famously callous lines early on ("Are there no prisons, are there no workhouses?") played more for laughs than shock at his inhumanity; the effect here is saved for when the ghosts repeat them back to him later in the full context of the people he's dehumanised. 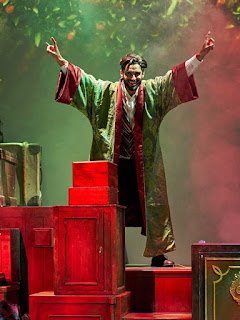 So the production focuses here on the warmth and charm of the story rather than the politics, which is fair enough in a family show, but with a subtle underscore of the implicit inclusivity: Figueiredo's warm, Indian-accented Ghost of Christmas Present is an instant audience favourite, and not only a present-day nod to the fact that Dickens' messages are universal, but also perfectly in keeping with the height-of-Empire setting of the original. Ferran's trademark steeliness under an apparently frail exterior is perfect for characters like Bob Cratchit, Scrooge's lost love, and the most intangible-seeming of the ghosts, Christmas Past. While SSRB plays Scrooge with a sense that the desire to change is somewhere in him all along. And of course, just like in The Lehman Trilogy, he's never happier than when playing a dowager aunt in a headscarf; honestly his non-appearance as an actual panto dame becomes more baffling every year. 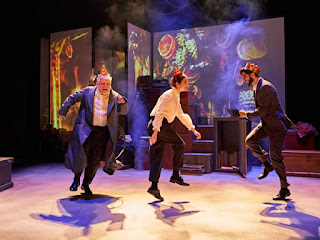 The creepier moments are also effectively done, with Marley's ghost accompanied by the rattling of chains that hang over the whole of Revitt's set (and are later repurposed as fairy lights,) and a reliably unsettling Christmas Yet To Come. While Hytner's adaptation covers all the familiar story beats, perhaps most memorable are those that don't always make it into adaptations - notably Christmas Present flying Scrooge around the country to see miners and lighthouse-keepers, who have to keep working on the holiday but keep up their seasonal spirit all the same, an epic journey enhanced by Luke Halls & Zakk Hein's video projections. In all this isn't a revolutionary production but it's great fun to see big names put their abilities to the most purely theatrical form of storytelling.
A Christmas Carol by Charles Dickens in a version by Nicholas Hytner is booking until the 15th of December at the Bridge Theatre (originally booking until the 16th of January, so in theory it's still possible it might reopen in the event of further tier changes.)
Running time: 1 hour 30 minutes straight through.
Photo credit: Manuel Harlan.
Posted by nick730 at 21:24