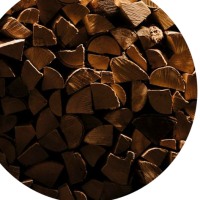 My "stage to screen" reviews were meant to be a very occasional feature in among the live theatre trips, but of course in 2020 they've ended up dominating. For my last one of the year it's one more of the shows I'd actually booked to see live but the government's Department of Tossing a Coin to See if Theatres Can Stay Open This Week put an end to that; having dipped their toe into digital content a couple of months ago when The Duchess of Malfi was briefly made available, I wasn't surprised when the Almeida offered a recording of their seasonal show to ticket-holders as an alternative. I say seasonal, but while the short preparation time led most theatres to dust off some version of A Christmas Carol, director Rebecca Frecknall, writer Chris Bush, songwriter Maimuna Memon (who also performs) and the cast were sent off to devise a more melancholy reflection on the season and the year leading up to it with Nine Lessons and Carols - stories for a long winter.
Memon, Naana Agyei-Ampadu, Katie Brayben, Toheeb Jimoh, Elliot Levey and Luke Thallon perform a bit more than nine songs, scenes and stories, opening with a fairytale that sets out the play's stall to deal with one specific element of the year more than any other: Loneliness. 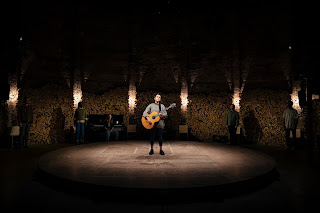 Early on in the show Memon has a song aimed at her January self (deciding if she could she wouldn't warn her, because she didn't need that anxiety,) but even though Covid and other specifics are never mentioned, lockdown is the backdrop for most of the scenes. Brayben's characters seem to long for a connection to nature, with one leaving her husband to travel in a camper van, and later in the show a homeless woman camping out in the allotment of an elderly lady who's been hospitalised, and taking care of it for her. Agyei-Ampadu and Jimoh never mention Black Lives Matter, but there's little question what protest march they're arguing over whether to break lockdown for. Thallon warns us that a story about him adopting an abandoned dog that ends up overrunning his life isn't a heartwarming one, and it's not long before the metaphor unravels to show what he's really talking about. 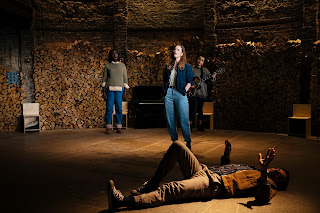 Possibly the most unnerving scene for me was one that reflects the anxiety of this year over trying to take care of ourselves while worrying about our loved ones: Levey and Thallon play father and son who, as the nights draw in, find it hard to keep track of the day and time; as the scene goes on our perception of which of their mental health we should be most concerned about keeps changing. A prologue voiced by Annie Firbank warns us that this evening will lie to us, and Tom Scutt's design of piled up firewood implies a deceptive cosiness. 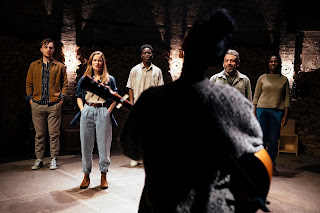 Not that this is a relentlessly bleak midwinter: There's wry smiles to be had in the darkness and black comedy like the recurring scene of ad executives trying to turn the year's events into a heartwarming TV spot. But even Levey's comic monologue of trying to follow the fad for baking banana bread slowly reveals a tragic backstory for his character. If there's an uplifiting side to Nine Lessons and Carols it's in its comparative realism - it doesn't paper over the cracks and accepts that 2020 will have done lasting damage, not least of all on our collective mental health - but that does mean that those glimmers of hope it offers feel like they're coming from an honest place as well.
Nine Lessons and Carols - stories for a long winter by Chris Bush, Rebecca Frecknall, Maimuna Memon and the company is available to stream until the 2nd of January on the Almeida Theatre's website.
Running time: 1 hour 30 minutes.
Photo credit: Helen Murray.
Posted by nick730 at 15:54