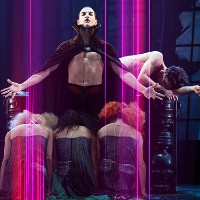 Regular readers of this blog will both know that ballet/dance in general isn't something I know anything about, but it is something that will very occasionally creep into my theatregoing. Often as a gift for my mum or sister, but sometimes for myself when the choice of subject matter is eccentric enough to grab my interest: Matthew Bourne's tendency to tell unlikely stories like Edward Scissorhands and Lord of the Flies through the gift of dance for example, or Drew McOnie turning Jekyll & Hyde into Sexy Sexy Little Shop of Horrors. So with my theatregoing still of the virtual variety, and both the BBC and Sky Arts having had a lot of ballet in their scheduling over the last few months, Northern Ballet's take on Dracula, still available on iPlayer, seemed to fit the bill. This is very much David Nixon's vision for Bram Stoker's story as he directs, choreographs and designs the costumes for the classic vampire tale.
The story largely stays faithful to the original novel, albeit with the added Dracula/Mina romance angle that's always been popular in adaptations - Jonathan Harker (Lorenzo Trossello) visits the Transylvanian castle of Count Dracula (Riku Ito,) where he inadvertently not only gives the vampire a new lease of life with his blood, but also inspires him to visit England and stalk Jonathan's fiancée. 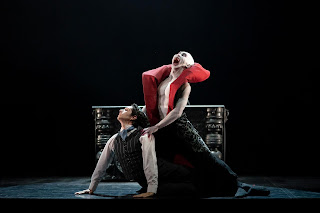 If the story is largely the original, the influence of various adaptations is apparent in the staging, the scenes at the castle reminiscent of the Francis Ford Coppola film in Ito's creepy acrobatics and the idea of Dracula initially being ancient and monstrous (though the design is more Nosferatu than Gary Oldman with a bouffant) and regenerating into Javier Torres after he feeds. At this point the look becomes much more the classic Bela Lugosi/Christopher Lee version of the character, complete with a huge cape that, to be honest, ends up defining Torres' performance more than it probably should because of how restrictive it is on the dance moves. 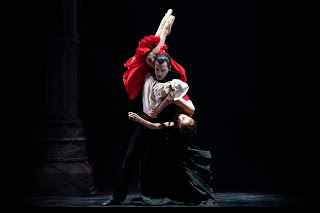 The dance is set to music by Alfred Schnittke, Sergei Rachmaninov, Arvo Pärt and Michael Daugherty which generally feels well-chosen and atmospheric. As ever I like to make the disclaimer that I don't know enough about dance to comment on the performances and choreography beyond my general reactions to them - for me the highlights were the opening scenes at the castle, a frenetic ball that gives a lot of the company a chance to shine, and the brief appearances by Kevin Poeung's caged Renfield. I also enjoyed the archness of elements like Lucy's (Antoinette Brooks-Daw) dresses getting redder as she gets vampier and skankier, or Mina's (Abigail Prudames) bed seeming to have the Iron Throne behind it for some reason (set design by Ali Allen.) 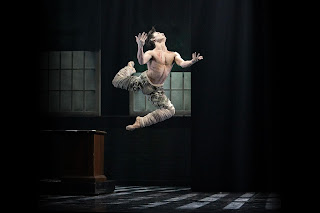 But there were also long stretches I found pretty dull, and I was never sure quite how deliberate the archness was - I certainly found Torres' signature walk, tiptoeing sideways across the stage with his feet poking out beneath the cape, to be hilarious, but I was far from sure it was meant to be. Admittedly, dance has a hard job of holding my attention which is why I so rarely watch it, but it can be done and Dracula didn't consistently manage it. It didn't really deliver the chills or go all-out in the opposite direction of embracing the camp potential.
Dracula by Northern Ballet, based on the novel by Bram Stoker, is available until the 30th of May on BBC iPlayer.
Running time: 1 hour 45 minutes.
Photo credit: Emma Kauldhar.
Posted by nick730 at 19:45