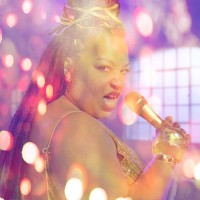 An original offering from the stream.theatre service, Dean Johnson's production of BKLYN unearths a 2004 musical by Mark Schoenfeld and Barri McPherson (book, music and lyrics) I don't think I'd ever heard of before; having now watched it, its obscurity is no suprise. That particular American mix of maudlin and saccharine I have no truck with, BKLYN is like Rent (a show whose success it's blatantly trying to capitalise on) without the decent songs or any attempt at coherence. A storytelling musical told by a group of homeless people under the Brooklyn Bridge, the Street Singer (Newtion Matthews) narrates the story of Brooklyn (Emma Kingston,) a young French girl whose mother (Sejal Keshwala) commits suicide when her American father never returns from the Vietnam War. Brooklyn returns to the city she was named after to become an overnight singing superstar, but this is just a coincidental sideline to finding her lost father Taylor (Jamie Muscato.)
Brooklyn's late mother taught her the tune of a lullaby her father composed, but not the words; so she ends every concert by singing the wordless lullaby, in the hope that the man who recognises the tune and knows the words will be her father. (The suggestion seems to be that her meteoric rise has little to do with her songs or voice, much to do with the fairytale aspect of her ending every show by honking "BUT MY DADDY ISSUES!" at the audience.) 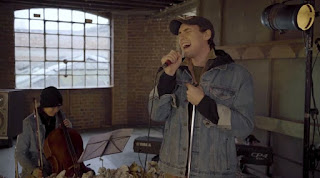 It's worth saying that Johnson's production is strong, with some decent conceits on how to use cutaways to fill in the background story, and committed performances. Andrew Exeter's design is a bit too clean and neat for the world it's trying to represent, but it does make theatrical use of the loft spaces this was filmed in. Unfortunately none of this could sell me on the show itself, a hamfisted fairytale built around an insufferable Mary Sue who's also the least French person ever to have existed. Any humour is strictly accidental, especially Brooklyn's response to the Street Singer mentioning weeds coming out of the pavement cracks, "WEEDS? I ONLY SEE ROSES," not helped by Kingston giving the line the full "Is. It. RAINING I. Hadn't? Noticed" delivery. 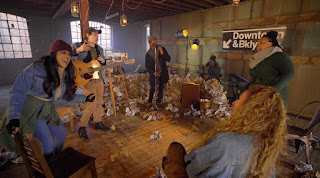 Brooklyn's lack of a personality doesn't help with the fact that you instantly root for the show's antagonist: Miss Paradice (Marisha Wallace) is the kind of Disney villain who not only upstages everyone else but who you also kinda think has a perfectly valid point (in that Brooklyn turns up and, for no reason whatsoever, is declared to have displaced Paradice from the career she's spent a lifetime building up.) She's also the only character to have any dynamic moments, in a collection of songs designed to give the cast moments to belt out big notes, and with no other purpose whatsoever. 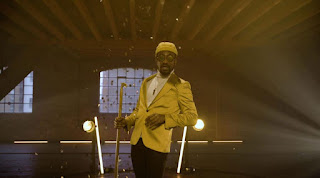 The hamfisted attempts to give the musical a social conscience also backfire spectacularly, consisting as they do of the songs occasionally going "SOMETHING SOMETHING AIDS! SOMETHING SOMETHING VIETNAM!" And there's something really uncomfortable about the story-within-a-story's conceit of a group of homeless people cheerfully telling a story about a couple of divas battling it out for a big cash prize and an ego boost. A good cast, the kind of production that continues to convince me that online theatre will continue to develop as a new art form after the real thing comes back, but hopelessly weak and unpleasantly cynical material to work with.
BKLYN by Mark Schoenfeld and Barri McPherson is streaming until the 4th of April on stream.theatre.
Running time: 1 hour 25 minutes.
Photo credit: Sam Diaz / Dean Johnson.
Posted by nick730 at 15:58