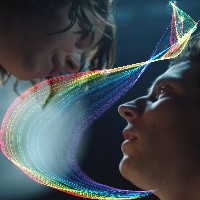 Another very literal interpretation of the phrase "stage to screen" saw the Lyttelton Theatre's stage and wings turned temporarily into a film studio late last year. Among the many Romeo & Juliets cancelled or postponed in 2020 (what's the collective noun? Soutra Gilmour's design here certainly makes a case for "a vial" of Romeo & Juliets,) was Simon Godwin's at the National. Instead of getting put on the back burner or cancelled entirely the NT came up with a third option, teaming up with Sky Arts in the UK and PBS in the US to come up with a TV movie special. What this loses in nearly half the running time it gains in star power - Pirate Jessie Buckley as Juliet, Josh O'Connor as Romeo and Fisayo Akinade as Mercutio had already been announced before the lockdown scuppered the stage production, but I don't know that we'd have necessarily got Lucian Msamati as Friar Laurence, Tamsin Greig as Lady Capulet, Deborah Findlay as the Nurse and certainly not Adrian Lester in essentially a cameo role as the Prince, in a full live run.
Romeo and Juliet are two young people who come from families that have been at war for generations, but when Romeo sneaks into a party held by the Capulets, he and Juliet immediately fall for each other and decide to elope. But no sooner have they done so than the age-old quarrel between their families explodes in violence again, which together with Juliet's parents' wish to marry her off to someone else serves to part the young couple. 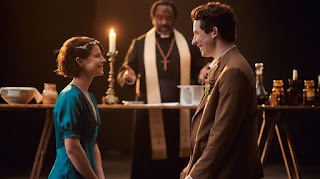 It seems odd to complain about a Romeo & Juliet being too short when I'm always complaining about it dragging on. But where most plays I find too long tend to have a lot of setup that could easily be cut, leaving you fed up by the time you get to the important stuff at the end, this one is the other way round: I generally tend to enjoy or at least not mind the frantic first half of the play, with the second half the part where a small amount of story really gets dragged out and could do with a trim. So this 95-minute version, which gets us to the usual interval point (Romeo and Juliet banging) before the 55-minute mark, feels rushed. 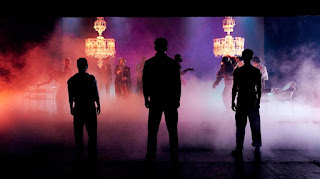 It also felt one-note to me as a result: The staging conceit is lovely, opening the play with the cast in a circle in a rehearsal room before gradually expanding out, and finally flipping in the party scene to something more fully staged and dreamlike, still never disguising the fact that it takes place on a stage. With a mix of fully-built sets for the bedroom scenes and characters walking between a bare stage and the wings elsewhere, it has the feel of the camera following the actors around as they perform in a live production. But embracing the TV and film trope of everything being moodily underlit is less visually interesting, and it feels like Emily Burns' adaptation of the script has focused on the poetry of the romance over the violence and heady excitement that's the spur of the story in the first place. The world of this particular staging is well-established; the world the characters are actually meant to occupy, less so. 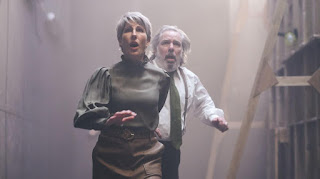 There's still a lot of ideas that would have been interesting to see fleshed-out in a full production. Notably Godwin flipping the roles of Capulet (Lloyd Hutchinson) and his wife: Under the lovable comic actress and National Treasure Greig has another specialty in a brutally chilling kind of menace, and giving her the more volatile of Juliet's parents gives her a chance to properly flex that. The more Romeo & Juliets I see the less sympathetic I am to Mercutio's dying curse on the families whose rivalry leads to his death (he's seen as the tragic clown who dies defending his friend but I increasingly see him as the Montagues' equivalent of David Judge's hissing, bloodthirsty Tybalt; seeing Romeo try to defuse the situation he instead actively antagonises the other side - is he really innocently caught up in someone else's fight, or does he deliberately hang out with the Montagues because he's excited at the thought that things could kick off at any minute?) Here there's a hint of fleshing him out more by giving the story a second star-crossed romance between Mercutio and Shubham Saraf's Benvolio, cut short just as they're about to give in to their feelings; but there's not enough time to really explore this. 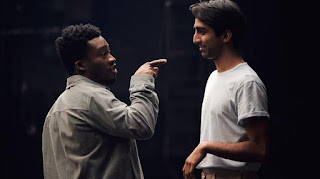 As you'd expect the performances are strong - out of the two leads Buckley seems to get more of a chance to properly flesh out her character than O'Connor, and among the adult characters Greig gets the most to sink her teeth into, with Findlay and Msamati feeling disappointingly glanced over. But there are certainly some clever ideas in the way the story is contracted - like Benvolio overhearing the Capulets discuss Juliet's "death" and going straight to Romeo, getting around a whole mass of plot points about how the latter fails to get the message in time that the death's a fake. I don't know how well it would pass the test of a person completely unfamiliar with the story making sense of it, but there's the germ of a lot of interesting ideas in an adaptation that is largely rushing through its story too quickly to really get its teeth into it.
Romeo & Juliet by William Shakespeare, adapted by Emily Burns, will be repeated in the UK on Sky Arts and stream on nowtv, and will premiere in the USA on PBS on the 23rd of April. (Worldwide streaming is unconfirmed at time of writing, but is expected to be on NTatHome.)
Running time: 1 hour 35 minutes.
Photo credit: Rob Youngson.
Posted by nick730 at 18:25