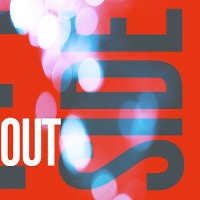 Well, we can add another authentic theatre experience to the streaming equivalent: Those times a show has to be interrupted due to a technical hitch (and you're not sure how long it'll take to fix, should you go to the loo in case the show overruns a lot, or will you be out of your seat when it starts again?) Following last month's INSIDE, the Orange Tree live stream returns with a second trio of new short plays - this time all written by people who've worked at the venue before, if not necessarily as a writer. Unsurprisingly the theme this time is OUTSIDE, and Sonali Bhattacharyya's Two Billion Beats interprets this as a school playground, where star pupil Asha (Zainab Hasan) is uncharacteristically having to clean up graffiti as detention, while her little sister Bettina (Ashna Rabheru) loiters, not wanting to get on the bus alone and get bullied. Unfortunately I can't critique Two Billion Beats as Hasan's microphone failed just as we were getting to the crux of the play, so I didn't hear most of her dialogue from that point on; but the start did seem promising, with Asha comparing her school essay-writing technique to clickbait that gets her teacher hooked.
The sound problem clearly wasn't restricted to one rogue mic though, as when Fiston Barek entered for the second play it affected him too; the show was paused, the problem resolved and the play, Kalungi Ssebandeke's Prodigal, started again from the beginning. 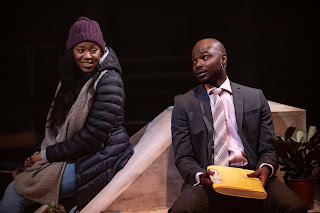 Barek's Kasujja is the titular prodigal, returning to his family's flat after five years without any contact, a week too late for his mother's funeral. He says she left instructions for him to collect her life insurance paperwork, but in Ssebandeke's interpretation of the "outside" theme, his sister Rita (Robinah Kironde) won't let him into the house. The play very quickly and effectively builds up a complex story of how Kasujja and Rita fit in as two of five siblings, and why the former, the eldest, was always an outsider; although it does rely heavily on them furiously arguing for most of the play to do so, which starts to feel forced. There are green shoots of hope though, as there are everywhere in this second trio (all directed by Georgia Green, with Max Pappenheim's sound design linking the stories with the sound of planes - something that suddenly went very quiet for much of the first lockdown.) 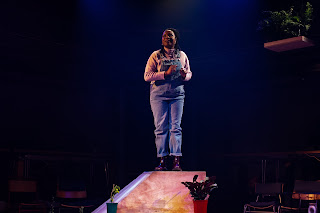 And lockdown is directly addressed only by the final play, from one the venue's rising star writers, Zoe Cooper. Temi Wilkey performs bittersweet monologue The Kiss as Lou, who's just moved into a suburban Newcastle neighbourhood with her wife when she's put on furlough. With some of her new neighbours passive-aggressively making their feelings about a lesbian couple down the road clear, others, including the mother of a possibly transgender child, try a bit too hard to be friendly. Lou struggles to make a connection though as she's stuck inside all day, looking out at her neighbours' gardens from her window. It's a moving look at the mental health problems many faced when taken away from human contact, but Cooper has a charming and slightly surreal twist in mind to help Lou reconnect with the outside. OUTSIDE makes for a hopeful end to this theatre's online-only only season, matching the hope that the transition back to live performance as we know it is imminent.
OUTSIDE: Two Billion Beats by Sonali Bhattacharyya, Prodigal by Kalungi Ssebandeke and The Kiss by Zoe Cooper, is streaming until the 17th of April on the Orange Tree's website.
Running time: 1 hour 30 minutes straight through.
Photo credit: Ali Wright.
Posted by nick730 at 21:18