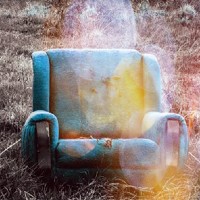 Necessity has made for a lot of different interpretations of what "online theatre" consists of over the last year, ranging from the lo-tech to shows barely distinguishable from TV or film. For their first tentative return to new programming the Orange Tree go for the most literal version, which for my money is the closest thing to the frisson of the real theatre experience: A show presented on their stage, with the actors performing live, and the audience have to be in their seats on time - albeit their seats in front of the computer or TV. After Hymn this is only my second live-streamed show of 2021, and perhaps it had an extra touch of nostalgia for me as the Orange Tree is where I saw my last in-person show before the first lockdown. Their streaming commision is six short plays from a mix of writers who've worked there before and others who haven't; presented in two triple-bills, they're reactions to the last year's events under the rough themes of Inside/Outside. Directed by Anna Himali Howard, the INSIDE collection is first.
Deborah Bruce's GuideSky and I is first; Samantha Spiro plays Diana, whose mother died alone of COVID-19, and who now has to go clear out her house and take care of her cat. She orders a new cat bed online from GuideSky125, an online seller who turns out to be a scammer with a history of sending cheap alternatives to the quality goods they advertised, and becomes a focus for Diana's frustrations. 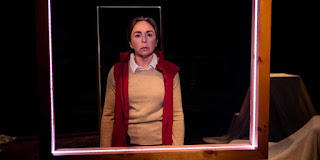 These three plays set within four walls deal largely with loneliness, and after taking a while to get going - Diana is a bit one-note furious to start with - GuideSky and I may end up being the most memorable of the trio. Lockdown hasn't caused this woman's loneliness but exacerbated it: Before she had her mother to talk to, but she also had the little interactions in shops and cafes with strangers that made her feel part of the world. With that at a minimum, she's ended up going the other way, paranoid and actively avoiding the neighbours who might be offering sympathy. But her need for human contact finds an unusual outlet, and in her imagination the villainous GuideSky125 takes on a new personality. 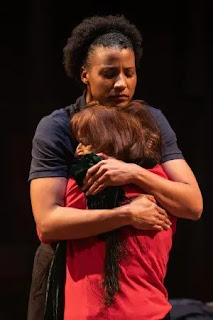 Also desperate for human contact is Meg (Ishia Bennison,) an older woman in sheltered accomodation in Joel Tan's When the Daffodils. She does at least have someone occasionally come into her home, as support worker Samia (Jessica Murrain) brings in her weekly shopping. In the runup to Christmas she desperately tries to get Samia to stick around for a little bit longer, but something about this lockdown is different to what we've experienced recently: Tan has a plot twist in mind connected to the way his story taps into the way time has become meaningless and confusing in the last year. It's a bit clumsily handled which may be why I found this the least satisfying of the three plays, but Himali Howard's direction does capitalise on the way a hug between people who shouldn't touch has become a powerful shock moment, and you can imagine the slight gasp you'd hear if there was a live audience there. 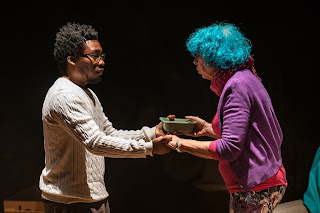 Joe White is the returning playwright, having made his debut at the Orange Tree with Mayfly, and he rounds out the evening with Ursa Major. Jay's (Fisayo Akinade) wife has just left him, and after having a drunken fight with a self-checkout machine he ends up inadvertently offending Callisto (Sasha Winslow,) a homeless woman who lives, she insists by choice, in a tent in a nearby park. To make up for it, she asks him to invite her round to his flat so she can use his microwave, and while there the strangers find a connection. The play loses its way a bit during Callisto's lengthy life story, but finds an emotional centre that's quite moving by the end. It also has its own twist on the topic as Ursa Major takes place some time after the pandemic's end, and Jay has developed seemingly permanent OCD-like tendencies that he never had before it. It's a reminder that for all the bombastic talk of returning to normal, the ongoing lockdowns will have long-lasting psychological effects for many. This isn't the cheeriest trio of plays but they do share an essential, hopeful warmth about humans' need for connection, and the possibility for finding it again one day.
INSIDE: GuideSky and I by Deborah Bruce, When the Daffodils by Joel Tan and Ursa Major by Joe White, is streaming until the 27th of March on the Orange Tree Theatre's website.
Running time: 1 hour 30 minutes straight through.
Photo credit: Ali Wright.
Posted by nick730 at 21:12