Stage-to-screen review: One Night In Miami... 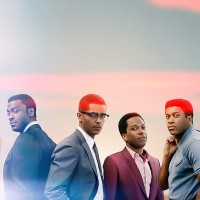 In recent months both of the original big streaming services have offered, on the more "prestige" end of their output (coincidentally today it was announced both films had received multiple Oscar nominations,) film adaptations of stage plays that imagine the behind-closed-doors life of iconic 20th century black figures. A few weeks ago I watched Netflix's Ma Rainey's Black Bottom, which I found good but lacking some of the dimensions of the original; today I tackled Amazon Prime's offering, One Night In Miami... which if anything has the opposite effect of building up the play's world. Part of that is simply down to time: Ma Rainey cut at least an hour off the original play's running time, but when I saw Kemp Powers' play at the Donmar Warehouse in 2016 it ran at a tight 90 minutes, meaning this nearly two-hour film is actually longer than the original. Powers himself adapts the screenplay for Regina King's film, which takes place in 1964, hours after a boxer still known as Cassius Clay (Eli Goree) first becomes heavyweight champion of the world.
A night of wild partying is to be expected when he invites two fellow superstars, singer-songwriter Sam Cooke (Leslie Odom Jr.) and American football fullback Jim Brown (Aldis Hodge) back to a hotel room, but instead of women and booze they find Malcolm X (Kingsley Ben-Adir) there. 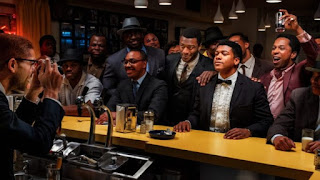 Clay is soon to publicly announce he's joining the Nation of Islam and changing his name to Muhammad Ali, and Malcolm X is there to try and convince the others, if not to do the same, at least to use their platform to do some good for the cause of black Americans. Cooke is his particular target: Unaware that he's already written "A Change is Gonna Come," he sees him as a huge talent who wastes his time as a romantic crooner pandering to white audiences. An imagined version of a real meeting, Powers' story is a classic clash between Malcolm X's aggressive approach to civil rights and Cooke's attempt to play the system by using the popularity of white artists like The Rolling Stones to make himself and other black creatives rich - and eventually take their rightful place in the mainstream music charts.

Powers' expansion of the play into a wider world is a very successful one; he uses most of the additional running time at the start of the film, to show us the context of each of the four men before he throws them together: Brown occupying a world where hero-worship and breathtaking discrimination coexist with no apparent sense of irony, Clay only just winning his fight against Henry Cooper because he hadn't quite got the balance between his signature showmanship and strength right yet, and Cooke tanking in front of a disinterested white audience. Among all these big charismatic characters Ben-Adir has the hardest job with the single-minded, humourless Malcolm X, but Powers does help him get sympathy with his own introduction, the internal tensions that would lead not long after to his assassination leaving him feeling constantly persecuted: In the film, his Nation of Islam bodyguards feel more like his jailors from the start. 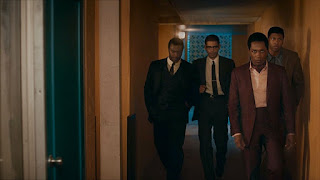 Despite all this the film keeps the play's energy, that even while dealing with dark issues that have no business still being as relevant in 2021 as they are, maintains the underlying mood of celebration. It feels like Powers has also smoothed out aspects of the play that didn't work as well: He must have known he was taking on a mammoth task in putting Cassius Clay on an adrenaline rush in the room and not have him overwhelm the scene, and sidelining him felt forced on stage. Here Goree convinces in the way Clay's respect for both men makes him take a supporting role in trying to reconcile them; he also takes centre stage again later as Clay realises that Malcolm X has been willing to manipulate him to get what he wants. One Night In Miami... ultimately sees Cooke's approach as more successful, admittedly in the more modest ambition of  changing the music industry, not the whole world (a coda shows him premiering his civil rights anthem not in front of a small bored crowd but on The Tonight Show, proving he can also pick his battles.) But it gives both sides a fair hearing, showing us the impossibility of the mountain they were trying to climb but the defiance and life force keeping them going.
One Night In Miami... by Kemp Powers is streaming internationally on Amazon Prime.
Running time: 1 hour 55 minutes.
Photo credit: Patti Perret.
Posted by nick730 at 17:57