Theatre review: One Night in Miami... 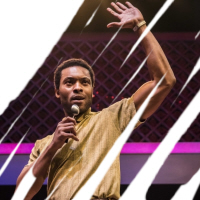 A bit of a thought out of nowhere: Not only are Professor X and Magneto on a London stage at the moment, there's also plays set in the motel rooms of both the civil rights figures who inspired those characters. This time last week it was Martin Luther King, now One Night in Miami... is spent in Malcolm X's room - again with some surprising company. Kemp Powers' play is another fictionalised version of a night that really happened: Four famous men who were also old friends, meeting on the night in 1964 that Muhammad Ali first won the heavyweight title. At the time Ali was still called Cassius Clay (Sope Dirisu,) but Malcolm X (Francois Battiste) had convinced him to join the Nation of Islam, and Clay was on the verge of going public with his support and change of name. Also there are the American football star Jim Brown (David Ajala) and singer-songwriter Sam Cooke (Arinzé Kene,) at the time best known for soppy but successful love songs.

All four have of course faced racism and all four feel they have done something to make things better for future black Americans but they have different ideas of what constitutes enough. 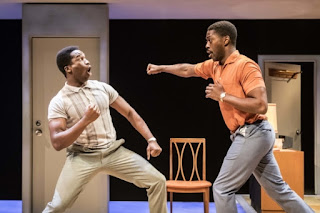 The play's main conflict is between Malcolm X and Sam Cooke, the former thinking the latter had the greatest talent and platform, and wasn't using it for the right reasons. Cooke on the other hand saw himself as playing the game on an equal footing with white men, running a label that promoted black musicians and made a lot of money for them. Unbeknown to Malcolm, Cooke had also already written and recorded his own civil rights anthem "A Change is Gonna Come." 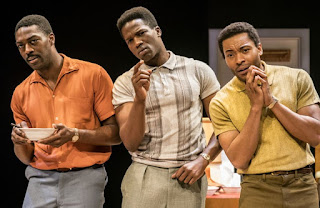 Framing this political debate in the context of a group of old friends, and particularly on a night when they're all hyped up by Clay's victory, means Powers can avoid making it dry, and instead we get an entertaining ninety minutes in which the men make fun of each other and try to party despite the lack of alcohol or women. Malcolm's lack of a sense of humour seems to be a real factor in his inability to convert Brown and Cooke, who've channeled their own aggression in more creative ways. 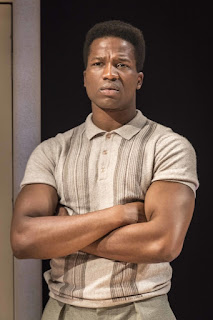 I was less convinced by the characterisation of Clay; Dirisu is a lot of fun as the familiar public face, hyperactive, full of catchphrases and self-aggrandisement, but he'd have overpowered the play if he'd been allowed to stay at that level throughout, and Powers doesn't seem entirely sure what to do with him once he quiets down - by the end Dirisu has turned him into a bit of a simpleton, which whatever else Muhammad Ali might have been, he never struck me as. 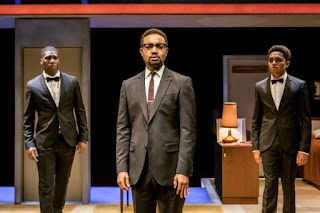 But in all other respects Kwame Kwei-Armah's production convinces - there is of course an underlying anger at inequality that, the ending reminds us, is still very much present; and there's a sense of threat in the lurking presence of Josh Williams and especially a monosyllabic Dwane Walcott as Malcolm's bodyguards, foreshadowing the fact that it would be Nation of Islam members who would kill him a year later. One Night in Miami... is serious at its heart but carries its message lightly.

One Night in Miami... by Kemp Powers is booking until the 3rd of December at the Donmar Warehouse.