Theatre review: A Pacifist’s Guide to the War on Cancer 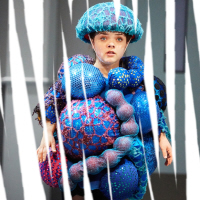 A musical about cancer sounds a dubious proposition at the best of times, let alone when there's the terrible precedent of Happy Ending. At least A Pacifist’s Guide to the War on Cancer is a musical with actual songs in it; performance artist Bryony Kimmings directs, co-writes the book with Brian Lobel, provides the lyrics to songs by Tom Parkinson, and appears as a pre-recorded voiceover narrating and occasionally interacting with the cast. Parts of the play are verbatim, with the majority of the patients we see based on specific people, but the central figure is more loosely based on Kimmings herself and a prolonged health scare her son had: Emma (Amanda Hadingue) takes her baby son to an oncology ward for tests she assumes will take a couple of hours; as it becomes increasingly clear the results are bad, this turns into 24 hours in a purgatorial grey hospital ward with people at various stages of their illness.

The idea behind the show, stated a number of times, is to use the unlikely medium to encourage people to talk more honestly about cancer, and perhaps in the process make it a little bit easier for the people suffering from it. 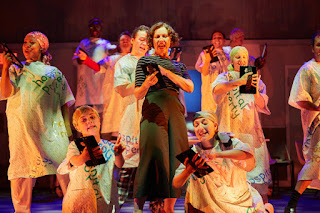 As Gia (Naana Agyei-Ampadu) states in one of the more on-the-nose moments, there's a lot of positive imagery encouraging people who are sick, which for some can paradoxically make it harder because they feel like failures for not being able to deal with it that way. The flipside is that for all the dancing cancer cells and music that, though ballad-heavy, does have some upbeat tunes, this is a relentlessly bleak show, somehow managing to be even more depressing than the subject matter sounds. It's noticeable that the one scene of a character getting good news is there mainly as a contrast to someone else getting the worst. 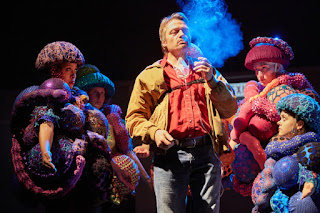 The show originally ran straight through but had an interval added during previews, which for me neatly separates it into distinct problems I had with it: Though it doesn't cheer up in the second half, the misery is now overshadowed by a sense of indulgence. I haven't seen Kimmings' work before but have heard good things about her as a solo performer; here, despite moving behind the scenes there's a definite sense that she's not ready to let someone else be the centre of attention. There are some characters who get their moment - Hal Fowler's Mark, an unrepentant smoker with lung cancer; Golda Rosheuvel's Laura, refusing to accept that she's coming to the very end; and Gary Wood's Stephen, both suffocated by his mother's (Amy Booth-Steel) attention and desperately needing it. But Kimmings' voice keeps cutting in, making it clear the central character is based on herself, in stark contrast to, say, Alecky Blythe, whose plays acknowledge her presence as interviewer but never by upstaging her subjects. 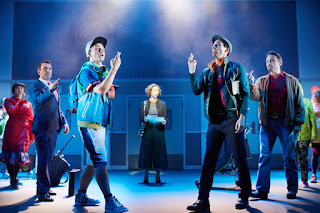 The ending, which brings the audience's own stories into play, will I'm sure have some vastly conflicting reactions, and clearly there were people in the audience who were profoundly moved and maybe even helped by it, but I found it pure emotional manipulation. And perhaps it's a selfish reaction from someone whose brain is capable of creating quite enough depression without any outside help, but the unbroken despair of the play is something I could have done without. Cancer is a depressing subject, it's still not cured and no treatment is guaranteed to be effective yet; but if someone who saw A Pacifist’s Guide to the War on Cancer went on to get a positive diagnosis I can't see where it would have given them a single reason not to throw themselves straight under a train, and that's surely problematic.

A Pacifist’s Guide to the War on Cancer by Bryony Kimmings, Brian Lobel and Tom Parkinson is booking until the 29th of November at the National Theatre's Dorfman.