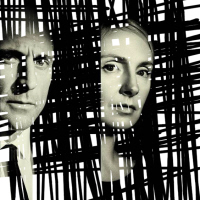 After his transatlantic success in Ivo van Hove's A View From The Bridge, Mark Strong returns to the stage to work with a director who's always shown van Hove's influence in his work; but in Robert Icke's first production at the National, it's a legendary film rather than stage director who immediately comes to mind. David Hare's new play The Red Barn is an adaptation of crime writer Georges Simenon's novel La Main, taking place in the winter of 1968-69 in New England, where lawyer Donald Dodd (Strong) and his wife Ingrid (Hope Davis) have their friends Mona (Elizabeth Debicki) and Ray (Nigel Whitmey) visiting. On the way back from a party they get caught in a blizzard, and only three of them make it back to the house: Despite Donald going back out to search for him, Ray is never seen alive again. Although the storm causes a number of deaths, Donald's jittery behaviour makes this one seem particularly suspicious.

Ray had made his friend executor of his will, but when he goes into New York to deal with it, Donald almost immediately starts an affair with the widow. 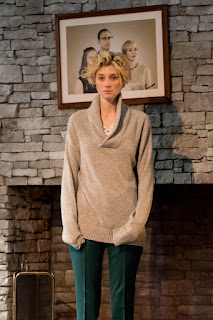 The signature visual in Bunny Christie's design is the four black curtains that form a box zooming in and out on each scene for an overtly cinematic effect - in fact from the brief prologue where Ingrid is getting an eye test, a closeup projection of her eyeball filling the scene, the visuals feel like they're referencing Hitchcock. It's a comparison that Icke builds everywhere from Debicki's icy blonde to the whole cast's impatient, staccato delivery. 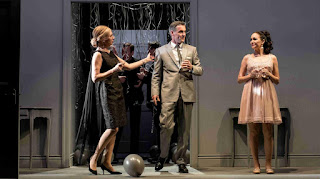 It's so stylish it has a magnetic effect, although the approach doesn't suit the whole play: It works for the mystery thriller element, and the Lyttelton's signature big scene changes get a touch of the Royal Court's "how did they do it so quickly" element when the curtain's down, the camera pan effect taking us from the Dodds' remote house to Mona's modish New York apartment, as well as giving us flashbacks to the fateful party, and a glimpse of the trudge through the snowstorm. But the significance of the titular red barn is easy to guess, and quickly confirmed in any case. Soon we've departed from the crime thriller and are in a psychological case study of Donald, a nonentity all his life who's now discovered a reckless side, and isn't prepared for how little control it will give him over the events he's set into action. 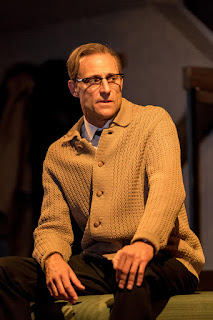 The trouble is there's a thin line between enigmatic characters and underwritten ones, and whether it's Simenon's original or Hare's version of them I don't know but they lean towards the latter. Possibly the most impressive achievement of The Red Barn is that for the best part of its two-hour running time it covers up this fact, and between Icke's boldly unhurried direction, the performances and Christie's showstopping design, it remains gripping. But the approach is certainly more suited to a mystery thriller than it is to a psychodrama, and eventually it does become apparent we're spending a lot of time getting to understand a character we don't really care much about.

The Red Barn by David Hare, based on La Main by Georges Simenon, is booking in repertory until the 17th of January at the National Theatre's Lyttelton.