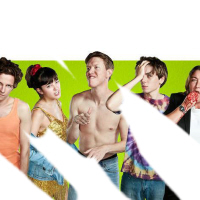 A few years ago Sean Holmes seemed to be initiating a tradition of reviving a famously dark and controversial play at the Lyric every autumn. We had Sarah Kane and Edward Bond's respective bouts of cruelty to babies, and now after a few years the nasty stuff returns for the 20th anniversary of another noted shocker - and one that did very well out of its reputation, getting a couple of West End runs out of it in the '90s - Mark Ravenhill's Shopping and Fucking. Young couple Robbie (Alex Arnold) and Lulu (Sophie Wu) live with the older Mark (Sam Spruell,) as his property - he bought them for £20 from a man he met in a supermarket. All three seem pretty happy with the arrangement until Mark has to leave for a few months to go to an addiction treatment clinic. Robbie and Lulu aren't used to fending for themselves, and in their search for work Lulu auditions for a TV shopping channel.

She's interviewed by the seedy Brian (Ashley McGuire, nicely keeping some menace in a largely comic performance with the occasional little wink to the gender-blind casting) who offers her the job on condition that she first shift 300 Ecstasy tabs for him. 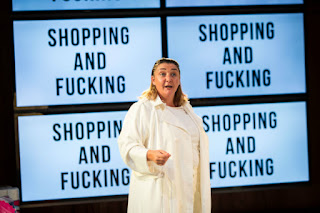 Meanwhile when Mark gets out of rehab he's been warned not to get too dependent on others, so he avoids his two lovers, going instead to teenage prostitute Gary (David Moorst) to keep things purely on the level of a transaction, but he's unable to stop himself getting attached. Holmes is of course a vocal fan of European theatre styles, i.e. nudity and food wastage, and we do indeed get a brief
FULL FRONTAL MALE NUDITY ALERT
from both Moorst and Arnold, while the latter also does some markedly odd stuff to some fruit. 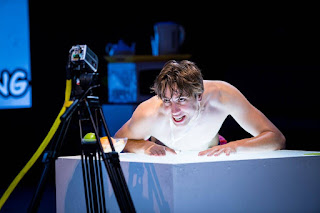 and it's got a really dark conclusion. I think Holmes applying his signature technique to it works much better for the play though, the day-glo surrealness emphasising the black comedy in among all the cynicism and shock factor. The "shopping" part of the title is if anything more emphasised than the "fucking" part, with the cast genuinely trying to get more money out of the audience before and during the show - selling badges and chocolate, giving two audience members a seat upgrade for a fiver each and requiring a coin from another to put into a slot and start the show. 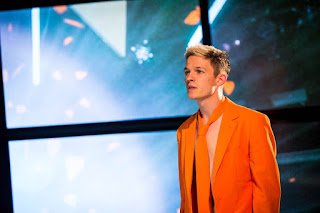 Designers Jon Bausor and Tal Rosner have done a major redesign to the Lyric's Stalls, with about half as many seats as usual in raked benches going right up to the Circle, and the rest of the seating added to the Stage Left wings, creating a corner thrust dominated by a green screen, adding surreal backdrops when the actors are projected onto the large monitors. It does feel sometimes as if Holmes has forgotten this redesign in his blocking - I was in the onstage seating and after a while everything seemed to be played out to the front, although Arnold in particular seemed to always remember to always include us in the story (there is also some mild audience participation in the Stalls and onstage seating but nothing too mortifying.) Ultimately I'm still not enitrely sure what I think of Shopping and Fucking but Holmes has found an energetic way to bring out the best in it.

Shopping and Fucking by Mark Ravenhill is booking until the 5th of November at the Lyric Hammersmith.