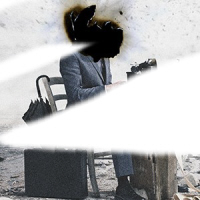 Jason Loewith and Joshua Schmidt's Adding Machine, based on a 1923 piece of expressionism and getting its UK premiere from Josh Seymour at the Finborough, follows Mr Zero (Joseph Alessi,) who works in a large store, adding up figures in the back room. He's had the same job for 25 years, the same amount of time he's been married to Mrs Zero (Kate Milner-Evans,) who mainly screams abuse at him through the medium of opera. Zero believes that his 25-year anniversary at work will surely be marked with a promotion to the front store, but in fact his boss (James Dinsmore) cheerfully informs him he's being fired and replaced with an adding machine. Zero's reaction to being discarded is violent, and he soon finds himself on Death Row alongside Shrdlu (Edd Campbell Bird,) a highly religious murderer who's looking forward to getting tortured in Hell for his crimes.

It may be apparent that Adding Machine is a bit on the odd side but its story is perfectly straightforward compared to the way it's told. 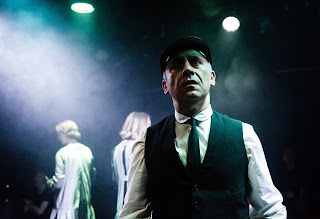 It belongs to a particular kind of American musical genre that revels in the complexity of its music. I suspect composers like Schmidt see Sondheim as too simplistic and Philip Glass as too melodic, because there's a deliberately unlistenable quality to the music - the show opens with Mrs Zero nagging Zero operatically for a solid ten minutes. The self-consciously experimental style - the website variously describes it as a musical and an anti-musical - means my reaction to the show varied wildly from scene to scene. 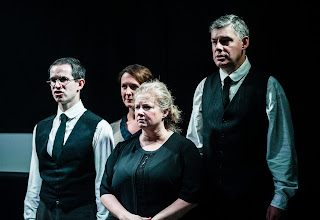 Mostly I found it slow and dull, and while the cast is good they're only as good as the material. The story itself, from Elmer Rice's play, jumps around a lot before the second half of the play turns into a trip to the afterlife, with so many different theological options getting a look-in that it feels trite. Add in an unlikeable hero and you've got quite a collection of elements I find hard to warm to: Zero is meant to be an everyman, but he's a racist cunt which is what people were like in The Past*, his example of his own saintliness being that when a black man stepped on his foot by accident, Zero didn't set him on fire. Obviously "a black man" isn't the precise term used. 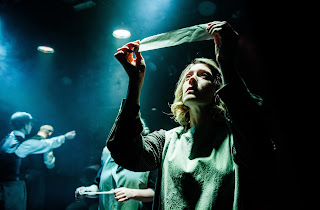 In fact the most likeable figure is the self-loathing matricide Shrdlu, given an unlikely kind of charm by Campbell Bird. The production's oddness is interestingly staged in traverse, and Frankie Bradshaw's raised stage design hides a set change that brings a welcome twist of tone to the show. The black humour of the piece occasionally raises it as well but ultimately there's just too many elements that I had trouble warming to, in a piece whose primary purpose seems to be to tell us how clever it is.

Adding Machine by Jason Loewith and Joshua Schmidt, based on the play by Elmer Rice, is booking until the 22nd of October at the Finborough Theatre.