Theatre review: The Boys in the Band 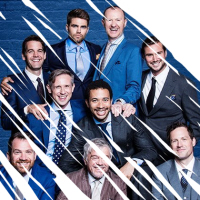 A genuine classic of gay theatre - groundbreaking in its subject matter at the time, and with a clear influence on later writers' work - Mart Crowley's The Boys in the Band gets revived by Adam Penford for the Park Theatre. A look at gay life in 1968 New York, its characters have found a subculture they feel reasonably safe in, but their sexuality is still something they need to keep behind closed doors. Michael (Ian Hallard) is hosting a birthday party for Harold (Mark Gatiss) who, as always, is expected to show up late. An early arrival is Donald (Daniel Boys,) Michael's on-off lover and a neurotic who's had to move out of the city as can't handle it full-time. The rest of the invited guests all soon turn up, as does an unexpected one - Michael's college roommate Alan (John Hopkins,) who hasn't been told about his friend's sexuality.

Michael is determined that his friends keep Alan in the dark, supposedly because his aggressively straight friend couldn't handle it, but as it turns out there's other personal history he doesn't want to confront. 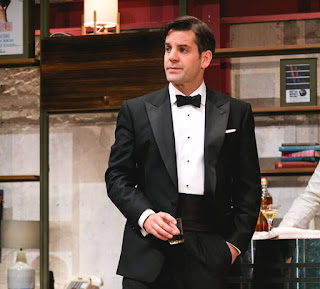 Rebecca Brower's design of Michael's flat covered in photos of divas sets the scene, and the attention to detail means the period setting is always evoked, stopping the play from feeling dated. In fact as I alluded to earlier, the play's influence on gay theatre is obvious in the character types who were copied for decades to come: Michael is the self-loathing, destructive bitch at the centre of things, Bernard (Greg Lockett,) dealing with the double discrimination of being gay and black, has cast himself as the sensible, reliable one. There's a conflicted couple in Hank (Nathan Nolan,) who left his wife when he fell in love with Larry (Ben Mansfield,) who refuses to be monogamous, and when Harold finally arrives he's a fount of acidic asides. 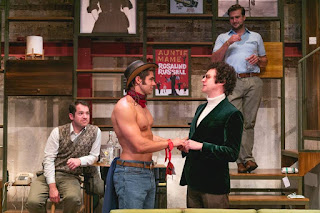 The inevitable scene-stealer is James Holmes as Emory (that's Emory and not, as Phill thought, Anne-Marie,) even in this superficially friendly environment something of a runt of the litter due to his size and effeminacy, something he deals with by playing it up, dressing in shorts like a grotesque schoolboy and using his campness as a form of defence. He's brought along a special present for Harold, Cowboy (Jack Derges,) a rent boy he's hired for him for the night; Cowboy looks like Barbie's ex-husband Ken has stolen Woody from Toy Story's outfit, and is an endearingly dim outsider baffled by the clique's complex and destructive relationships. 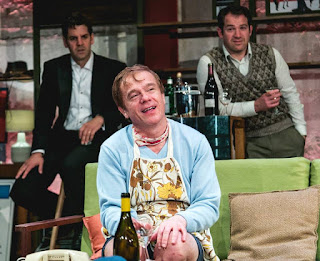 I'd heard The Boys in the Band was actually quite bleak, which at least in this production isn't really the case: It's certainly got a dark underside, and explores the self-loathing and pettiness that take over when people are just about starting to be tolerated but far from actually being accepted - the play only just predates the Stonewall riots, and police raids on gay bars are mentioned in the story - but although many of the characters are damaged it's far from a story completely without hope. 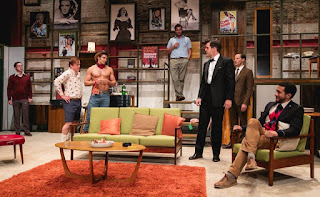 And whatever sad undertones it might have it's also told wittily, with a number of good one-liners: "Your lips are turning blue, you look like you've been rimming a snowman" is bound to be the most quotable line, but in context "go stand over there with the gifts" was my favourite. A higher-profile cast than the Park usually sees (much has been made in the publicity about Gatiss co-starring with his real-life husband Hallard for the first time, so there's an added layer to seeing them choose roles that just snipe at each other all the time,) also brings a lot of experience and makes for a strong production of a play that feels firmly of its time, but not like a museum piece.

The Boys in the Band by Mart Crowley is booking until the 30th of October at Park Theatre 200; then continuing on tour to Manchester, Brighton and Leeds.