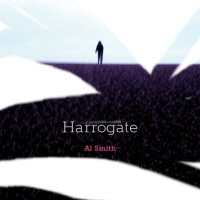 The first time I ever went to the Royal Court Upstairs it was for a play called Scarborough, named after a resort town where the central couple had sex in a B&B room (I was impressed by its star Jack O'Connell, wonder what happened to him...) So there's some déjà vu in the fact that Al Smith's Harrogate gets its title from a similar dirty weekend, although this time we're not in the room itself but in a London kitchen a week or two after the fact. Nigel Lindsay and Sarah Ridgeway play characters identified only as Him and Her, but while Lindsay's character remains the same throughout, Ridgeway is actually playing three different people over the course of the evening. Yes, it's one of those plays that's hard to even give a synopsis of without giving everything away so consider everything after the text cut as potentially spoilery.

Director Richard Twyman and/or sound designer George Dennis must be fans of Black Mirror, because they've seen the potential that Irma Thomas' "Anyone Who Knows What Love Is (Will Understand)" has to be a deeply unsettling soundtrack. It alerts us that something's wrong, and it's soon apparent what. 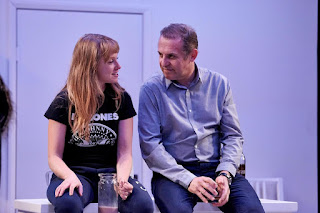 Lindsay's Him is an unemployed (but strangely affluent) man in his late fifties, and Ridgeway plays both his wife and his 15-year-old daughter, but it's the character she plays first who clues us into just how creepy Him's relationship with his family is: The first Her initially seems to be the daughter, but turns out to be a prostitute Him has hired not to actually touch, but to dress up as his daughter and act out fairly everyday scenes with her. In fact apart from being a bit more overt and harsh in the way he questions the fake daughter about her sex life, there's uncomfortably little difference between the conversations with her and the real one. 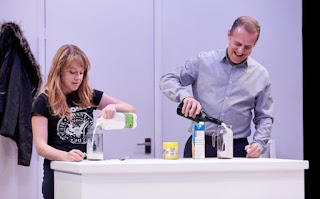 Despite what it sounds like, Harrogate isn't ultimately about abuse and the daughter never seems like she's in any danger; it's more about Him's nervous collapse, Tom Piper's traverse design an intimate but clinical space where the lights flicker when Him's mind is in danger of cracking. The title comes from what was probably the crisis moment, of Her lying about going to Harrogate for a weekend in bed with her boyfriend, and probably the point when Him's feelings for his daughter got so confused. The play's uncomfortable but not too much so, the construction as a kind of puzzle keeping the audience involved (and a scene near the end drawing audible gasps from the people behind me.) But it's Ridgeway who ends up the most memorable element for her performance, not just playing three characters but two of whom at times impersonate the third, the subtle differentiations are impressive and help with the off-kilter feel of the story.

Harrogate by Al Smith is booking until the 29th of October at the Royal Court's Jerwood Theatre Upstairs (returns only,) then continuing on tour to Farnham, Finchley, Harlow, Oxford, Canterbury, Norwich, Didcot, Bury St Edmunds and Cambridge.