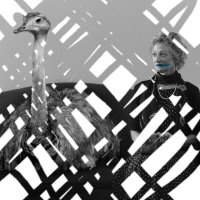 Shopping and Fucking might be the most attention-grabbing title getting a 20th anniversary revival but, already long-established by the time Mark Ravenhill & co emerged, Caryl Churchill showed around the same time that she could more than match the new faces for experimentation in form - even if, like her more recent Escaped Alone, she does it with middle class ladies rather than sexually charged Gen X-ers. Blue Heart is in fact a double bill of short works that play around with, in the first instance form, and in the second case language. In Heart's Desire, Alice (Amelda Brown) and Brian (Andy de la Tour) are waiting for their daughter Susy (Mona Goodwin) to arrive from the airport; She emigrated to Australia and this is her first visit back. But the wait is infinitely prolonged because Churchill keeps taking the action back to the start, or to a particular point in the conversation.

You could piece together a perfectly everyday conversation between the parents and Amanda Boxer's very funny Aunt Maisie, a mix of weird girly enthusiasm and brilliantly dragged out banalities. 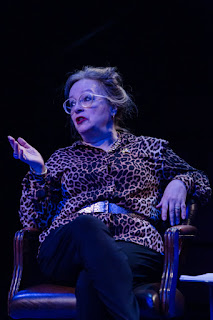 But it keeps getting interrupted, whether by something fairly ordinary like an argument between Brian and Alice causing the latter to storm out of the house, or by something much darker like a phone call bringing bad news. A couple of versions suggest this Middle England is in fact a island of calm in a totalitarian state or war zone; and without giving away one of the most bizarre twists, there's a couple of surreal endings that send the action back to try again. 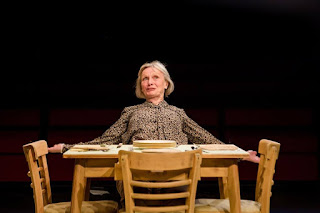 Churchill is of course the patron saint of short running times (I'm sure if she puts her mind to it she can manage a play that finishes before it's started,) and both these plays are brief, but we do get an interval to change Angela Davies' set in time for Blue Kettle, in which Derek (Alex Beckett) meets a number of women who gave up babies for adoption, claiming to be their long-lost son. He has some vague idea of conning money out of them, but only really manages to complicate things: Mrs Vane (Janet Henfrey) wants Derek to meet her husband Mr Vane* (de la Tour,) and and elsewhere he's self-destructively arranged for two of his "mothers" to meet. As the play goes on occasional words get replaced by the words "blue" and "kettle," and as we get to a confession of the heartbreaking truth to Mrs Plant (Boxer,) words break down even further into "bl" and "ket." 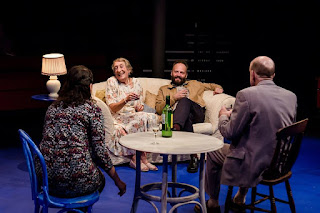 The two plays almost challenge you to find meaning in them, although since they first premiered we've had other high-profile work that's built on her techniques - obviously Heart's Desire's choose-your-own-adventure nature has echoes of Constellations, while more recently X had a breakdown of language similar to Blue Kettle's. David Mercatali's production doesn't try to find sense, instead charging ahead with focus and precision that bring out the comedy, especially in the first play, and highlights the amount of work that had to go into both writing and performance. It doesn't seek to explain but revels in the experimentation with form, and allows the audience to do the same.

Blue Heart by Caryl Churchill is booking until the 19th of November at the Orange Tree Theatre.

*although you can also call him Mr Raider, call him Mr Wrong, or call him Insane
Posted by nick730 at 17:24