Theatre review: The Rover, or, The Banish'd Cavaliers Best-remembered today as England's first female professional writer (although it turns out in the 19th Century her name was a euphemism for a reet dorty hoor, society having decided that "female professional writer" wasn't actually something they were ready for yet, thanks,) Aphra Behn's most famous play is The Rover, or, The Banish'd Cavaliers. The subtitle sets the action a couple of decades before the play's writing, during the exile of the prince who would eventually be Restored as Charles II. His followers, equally unwelcome in England during Cromwell's rule, had a mixed reputation, seen by some as accomplished soldiers, by others as thrill-seekers lacking morals. Behn gives us just such a mixed picture - veering towards the latter - in her quartet of Cavaliers who end up in an unnamed Spanish town during Carnival season, and intend to make the most of its spirit.

Their leader and dodgiest of the lot is Willmore (Joseph Millson,) who's got his heart set on the famous courtesan Angellica Bianca (Alexandra Gilbreath,) who charges 1000 crowns for a month with her. Willmore is penniless, but when he steals Angellica's portrait (which for some reason resembles Jennifer Saunders more than Gilbreath,) he also steals her heart. 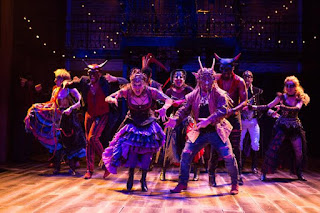 The smitten Angellica finds the tables turned, actually paying Willmore, but he's already looking elsewhere to a mysterious gypsy girl who's actually the disguised heiress Hellena (Faye Castelow,) promised to a convent but with other ideas of her own. Among the other Cavaliers, Belvile (Patrick Robinson) is trying to steal Hellena's sister Florinda (Frances McNamee) away from her intended husband, while in the most consistently funny subplot the foppish Blunt (Hollywood Body Double Leander Deeny) falls for a scam and ends up half-naked in a ditch. 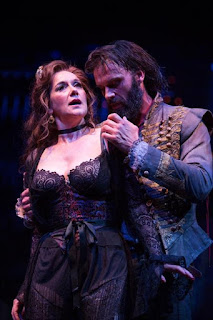 There's actually plenty more going on in the plot, making The Rover an unwieldy affair which for the most part Loveday Ingram's production handles well, although with it coming in at three hours it does have some lulls where I found it hard to care any more about the numerous intrigues. There's also memorable comic inventiveness though - much coming from Deeny although the highlight has to be Jamie Wilkes and Gyuri Sarossy having a flamenco-off. 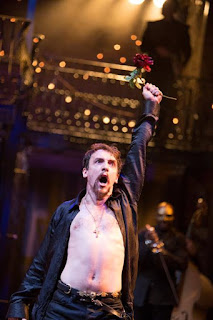 I've only seen the play once before and found its level of sexual violence hard to reconcile with the comedy. It's not quite as big a problem here (evidently there's two distinct versions of the play and this is the earlier, lighter one,) but there's still uncomfortable moments, notably in Blunt's random revenge on Florinda for another woman's crimes against him, especially when the until-then reasonable and decent Frederick (Patrick Knowles) joins in. Fit Dad's considerable charm is all that really lets a modern audience ignore Willmore's pretty much unbroken streak of nastiness. 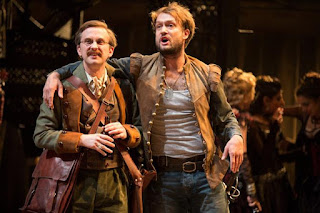 It's a tricky one, on one hand I'd have liked Ingram to acknowledge the way Behn's story lays out some terrible treatment of women a bit more; but it might have unbalanced what is already a tricky play to keep going. It does, for the most part, maintain its energy, Lez Brotherston's designs making period-styled costumes out of denim, and populating the stage with masks and lights that, together with Grant Olding's music, create the requisite Carnival atmosphere. Mostly successful although it could have done with a bit of a trim, and it does still amaze me sometimes the bleak things audiences will still laugh at.

The Rover, or, The Banish'd Cavaliers by Aphra Behn is booking in repertory until the 11th of February at the Swan Theatre, Stratford-upon-Avon.