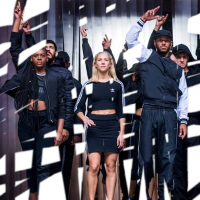 Not that theatrical trends are weird and unpredictable, but this time last year I'd only ever seen one production of Cymbeline - and that would have been twenty-odd years ago - but I've since seen it three more times. It's enough to make even this bonkers plot familiar, but the Globe's version makes it clear it's got something different in mind: Matthew Dunster has retitled Shakespeare's play Imogen to put focus back on the character who actually has the most to do; but it also has the effect of warning the audience not to expect the familiar, not a bad idea in a season that's famously angered the traditionalists (or at least those confident they know best what that tradition actually is.) It turns out Imogen becomes the star turn of Emma Rice's first summer season by exemplifying its theme of experimentation that may or may not work - but of all the new productions, finding a lot more that does work.

Since December I've seen Cymbeline set in the past and the future, now Jon Bausor's designer tracksuits set it firmly in the present, with Cymbeline (Jonathan McGuinness) an East London drug lord and Imogen (Maddy Hill) the daughter who pisses him off by secretly marrying childhood friend Posthumus (Ira Mandela Siobhan.) Cymbeline banishes Posthumus to Rome, where he gets into an ill-advised bet over Imogen's virtue. Giacomo (Matthew Needham, who turns out to be limber enough to squeeze into a much smaller space than you'd expect) is willing to cheat to win, but in a convoluted way not only brings the couple back together but many more lost family members besides. 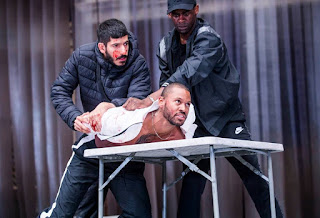 A few years ago Othello: The Remix became a huge favourite of mine by replacing Jacobethan verse with hip-hop, and here Dunster expands on that by applying that style and energy to Shakespeare's original text. There's a couple of dancer/actors in leading roles, unlikely to be a coincidence in a show where music plays a strong part and the violence often borders on dance. Cloten, the Queen's son and unwanted suitor of Imogen, is a character I've seen people take quite different views on in the last three productions. Joshua Lacey plays him as dangerously stupid: Comic relief on the one hand but all too prone to really quite viciously-staged outbursts of violence. This balance of comic and dark is one of the strengths of the production, with comedy found everywhere, but moments like Guiderius (Scott Karim) killing Cloten - easy to play for laughs - being done quite disturbingly. (Lacey then gets to return as a masked, topless Roman soldier just to show off his ridiculous chest.) 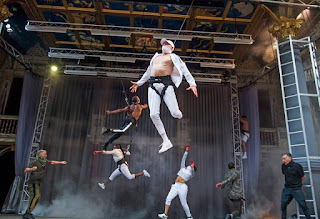 The vicious drug-trafficking setting of Cymbeline's court finds a lighter counterpart in Milford Haven, where the exiled lord Belarius (Martin Marquez) is a grizzled pot dealer with a steamed-up greenhouse. Casting deaf actor William Grint as Imogen's other lost brother Arviragus is more than just inclusive casting, as in a story with a convoluted plot, having his scenes partly done in sign language when he finally shows up is a handy reminder to the audience of who he is from when we saw him in an earlier flashback. 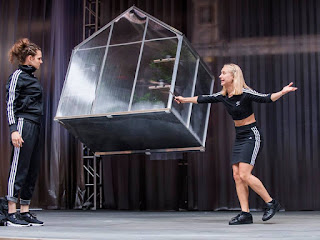 Hill is a likeable Imogen, whose no-nonsense nature culminates in a scene-stealing finale that gets cheers. If anything she seems an even bigger character than usual here, possibly through the technique of editing the text a fair bit but leaving one character untouched. It's not quite as good a production for the other big female part though, Claire-Louise Cordwell's Queen never really making the impact of a big villain. 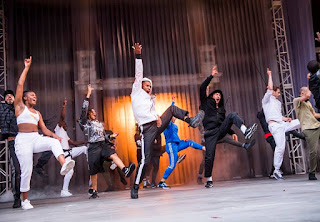 While clearly courting - and by the looks of things winning - a new audience, Imogen respects the text and those who know it (it opens with two characters trying to decide if it's "Imogen" or "Innogen," who's that for if not Shakespeare nerds?) A few of the bold ideas flop: A final battle flying on wires sounds amazing but apart from a couple of striking moments it's slow, awkward swinging from rickety scaffolding. But the hit rate is very high and everyone - not just the younger audience members - seemed totally absorbed. Could it have been staged pretty much anywhere else? Definitely, and in the case of the wire work, almost certainly better. But the Globe is where it's ended up, the open-air location adding to its dangerous energy and the street-dance setting giving it the chance for a very different kind of jig to end on, that'd raise the roof if there was one.

Imogen (Cymbeline) by William Shakespeare is booking in repertory until the 16th of October at Shakespeare's Globe.