Theatre review: The Inn at Lydda 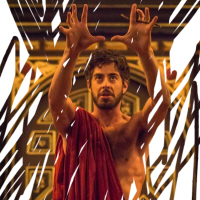 Although the initial description didn't instantly grab me, I eventually booked for The Inn at Lydda based on the cast - not only a strong cast but one largely made up of faces familiar to the Globe, suggesting that the new regime doesn't entirely want to burn bridges with the old one (something tricky to do anyway in the Swanamaker, where Dominic Dromgoole's face is part of the decor.) John Wolfson's play, getting a short run in the indoor playhouse, imagines a meeting in ancient Judea: The Emperor Tiberius Caesar (Stephen Boxer) is sick and dying, but has heard of a miracle worker in a distant part of his empire, who he's sure can cure him. Unfortunately by the time he and his entourage make it to Jerusalem, Jesus of Nazareth has been crucified by Rome's own representatives. But unlike the last version of the story we saw on a London stage, this one is based on Christian apocrypha, so the story doesn't end there.

In fact Jesus (Samuel Collings) has just returned from the dead, and is preparing to reveal himself to his disciples when he encounters a different set of figures from his past. 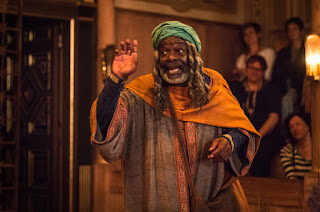 Its subject matter may seem esoteric but The Inn at Lydda is essentially a rather odd comedy that opens with the Three Wise Men, returned to see the climax of a story they were at the start of. They're there to try and convince Jesus to give Caesar a chance, while Caspar (Joseph Marcell) also tries - in vain, inevitably - to prepare Caesar for the fact that the healer he seeks isn't going to be what he expects. But they're also there to do some in-jokes about calendars, and the fact that they're going to need some kind of standard starting point to count years from. A couple of these kinds of gag aren't too bad but Wolfson does pile on the little anachronisms and winks to the audience, and an early problem I had with the play is that it does feel quite pleased with itself pretty quickly. 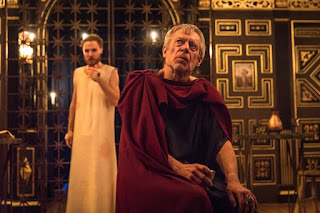 This is a play about power and when and how to use it, but it's also about madness: Tiberius' illness manifests itself in bouts of insanity (we first meet him speaking to his generals via a puppet beaver) and his nominated successor is Caligula, so things are only going to get madder at the top*. Also running around the mountains is John (Matthew Romain,) a follower of Jesus who chews on a hallucinogenic root and raves about Rome as an evil beast (the suggestion seems to be that this is the John of Revelation rather than the Apostle.) 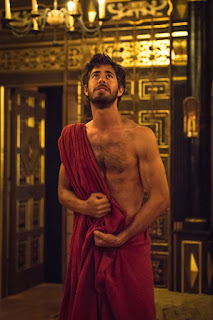 It's not surprising to see Philip Cumbus be the one to steal a show, something he does here in what is little more than a cameo as his scenery-chewing Caligula doesn't actually turn up until the second act; but he explodes onto and around the stage, pursuing his lover Mnester (Chris Lew Kum Hoi) in a fit of jealousy, in between proclamations of his own divinity. In a show where the anachronistic comedy doesn't always come off, Cumbus not only gets away with but makes a highlight of Caligula trying to seduce the half-naked John, complete with providing his own disco beat (and particularly excited about the fact that John's covered in mud, because he likes his boys dirty.) 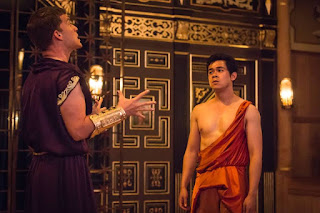 So something of a curate's egg all in all, I can't say it's not an enjoyable evening (and not just because of the men in skimpy togas) but the play feels fragmented and seriously flawed, right up to when it finally gets to the main event of Jesus and Caesar meeting, which feels abrupt and dry after the frantic nature of what's gone before (while the fact that it's played out as Life of Brian-lite until this point means it's lost any chance of being taken seriously.) The fact that for the most part the evening succeeds is down to director Andy Jordan and his cast, who make the most of a wobbly script.

The Inn at Lydda by John Wolfson is booking until the 17th of September at the Sam Wanamaker Playhouse.

*I saw this on Press Night so there were a lot of actors in the audience; including Matthew Needham, who I can only imagine was furious that there was a play with not one but two mad Roman Emperors and he wasn't cast in it.
Posted by nick730 at 23:26