Theatre review: If We Got Some More Cocaine I Could Show You How I Love You 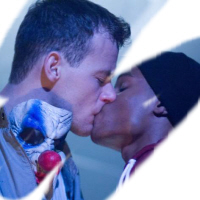 The second gay-themed plawrighting debut in a row at the Old Red Lion, and not only a more contemporary play but a much more successful one in John O'Donovan's fucked-up romance If We Got Some More Cocaine I Could Show You How I Love You. It's Halloween, and Mikey (Alan Mahon) and Casey (Ammar Duffus) have just robbed a petrol station to the tune of €16 and some loose tobacco, and are now running away from the police. Mikey grew up in the small Irish town where the story is set, and has barely left it, but Casey is originally from Croydon, his family having run away to Ireland five years earlier under shady circumstances. They've climbed onto the roof of Casey's house, stealing some cash and cocaine from his mum along the way, and now have to wait up there until the police leave.

After their initial panic, they decide to make the most of their situation by enjoying a different view of their town and some time on their own, but Casey has a plan he's keeping secret from his boyfriend. 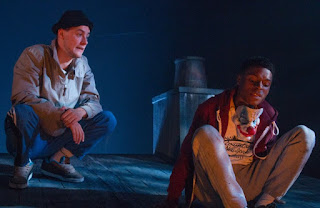 O'Donovan's got a few different themes in mind that come to the fore in the 75 minutes, not least of all the contrast between this likeable pair and how they're viewed by others - the older Mikey in particular is clearly something of a career criminal who talks as if he's one misstep away from being locked away for a long time; but there's a reason someone so seemingly affable has turned out that way. 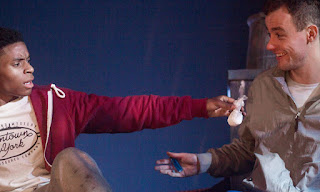 I was initially interested to see what seemed like a play in which it was entirely incidental that the central characters were a gay couple, so I was slightly disappointed to see this eventually turn out to be the crux of the story. But it does justify itself, giving a snapshot of how just because a country has voted for equal marriage it doesn't mean every corner of it has joined the 21st century: In a small town like this, the choice for young gay men seems to be to hide like Casey, or change your personality like Mikey, whose essentially laid-back nature has become aggressive to stop himself becoming a victim. 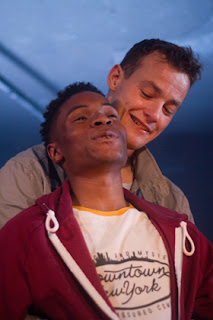 Although there's politics and various social issues - there's also discussions of domestic violence, racism and the consequences for people in dead-end towns like this after an economic crash - If We Got Some More Cocaine I Could Show You How I Love You boils down to a character piece, and Thomas Martin's production is strongly cast. Mahon in particular is incredibly charismatic*, while designer Georgia de Grey has squeezed a slate roof into the small theatre, with understated lighting by Derek Anderson giving a misty effect for an atmospheric, funny, gently tragic debut from O'Donovan.

If We Got Some More Cocaine I Could Show You How I Love You by John O'Donovan is booking until the 24th of September at the Old Red Lion Theatre.

*and hot in more ways than one: I don't know if the aircon was broken or the ORL decided they don't need it in September, but at least from an audience perspective it was only slightly uncomfortable in there; but the actors were dressed for the end of October in Ireland, and I don't know if it says more about Mahon or me that I still found him attractive after he'd sweated right through two layers of clothing.
Posted by nick730 at 17:26