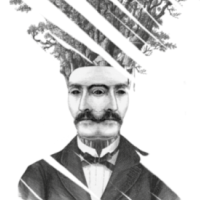 The "tiny" touring actor-musician Shakespeare productions haven't quite become a casualty of the Globe's new regime as Nick Bagnall returns to direct The Two Gentlemen of Verona, although the home lap of the tour now has a different venue, being squeezed into the Swanamaker rather than the main house. The candlelit Jacobean playhouse is a bit of an odd fit for Katie Sykes' mini-stage and a 1960s-themed take on Proteus (Dharmesh Patel,) who's sworn undying love to Julia (Leah Brotherhead,) but first has to make a trip to Milan to visit his friend Valentine (Guy Hughes,) who's been serving the Duke there. Valentine is in love with the Duke's daughter Sylvia (Aruhan Galieva,) a match he's not considered good enough for, and so the two have planned to elope, a plan he's shared with Proteus.

Unfortunately Proteus isn't anywhere near as loyal as he thinks, either to his friend or to Julia, and he's now decided he wants Sylvia for himself. 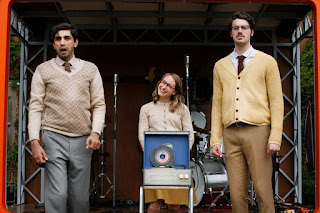 He betrays the plot to the Duke, getting Valentine banished to the woods, and tries to woo Sylvia for himself. Meanwhile the unsuspecting Julia has disguised herself as a boy to travel to Milan and find her lover, only to find that she's been unceremoniously ditched as soon as another pretty face appeared. 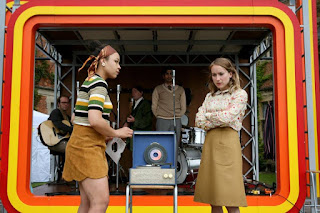 Productions of The Two Gentlemen of Verona have been known to focus strongly on music to help the fairly slight story along, and this is no different, the '60s theme giving composer James Fortune the chance to dip into the various musical styles that exploded at the time - Patel's Bob Dylan-esque love letter to Julia, and his spoken-word backing to a third suitor's (Amber James) "Who Is Sylvia?" are the highlights, while the forest becomes Woodstock for hippie outlaws. 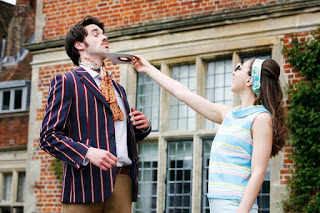 It's probably too much to expect a live dog on a small tour but Crab is such a legendary part of the play his absence is felt - having Launce (Charlotte Mills) dress musician Fred Thomas up as the dog is fun, but it's not really Two Gents if the cast aren't being ruthlessly upstaged by an almost-catatonic dog. The cast are good - I liked the geeky characterisation of the two gents themselves - and the production has its moments but the Swanamaker feels the wrong venue for a production designed to play outdoors (plus the 8pm start time means the evening becomes a late one.) Bagnall tries, at the play's end, to explore some of the misogyny in the casual way women are swapped around the male characters, but both comedy and darkness are constrained in here from really taking off.

The Two Gentlemen of Verona by William Shakespeare is booking until the 1st of October at the Sam Wanamaker Playhouse; then continuing on tour to Liverpool.