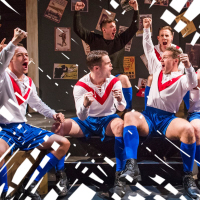 Another football-related First World War play doesn't look, this time, at amateur kickabouts in No Man's Land, but at professional players who were the predecessors of the kind of superstar footballers you get today. Michael Head's The Greater Game sees lifelong friends Mac (Peter Hannah) and Jonas (Will Howard) playing semi-professional football in Newcastle as well as working down a mine, when they're given the opportunity to turn professional with a transfer to Clapton Orient. It means uprooting their wives to London, and although the women take a long time to settle there the men quickly become beloved members of the team, Mac as the star player while the female fans inundate Jonas with love letters. But there's a war on, and while the official line is that it'll be over by Christmas, there's also an increasing voice that sportsmen should be leaving their games behind and joining the troops.

Clapton Orient ended up being the first team to send every able-bodied man from the team, totaling 41, to the front, and the second half of the play follows their battalion as they get cut down one by one. 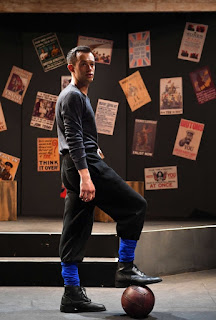 It's never the most encouraging sign when a play starts with a honking great cliché, and that's what The Greater Game does with an opening scene showing the players in the trenches before one of them asks "how the hell did we end up in this situation?" Cue flashback. I do feel bad for anyone trying to write anything about WWI, knowing they'll never actually portray the horror and pointlessness better than a 1980s sitcom did, but I do still think enough people in the audience will remember Blackadder Goes Forth well enough not to need the futility explained to them, and allow this particular story to be told. 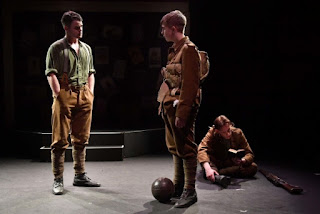 The frustrating thing is that Head knows precisely where the central story is - in Mac and Jonas' friendship - but doesn't trust it. In a common problem with adapting true stories or books (this is both) he tries to give every character their due, over-egging the narrative by trying to give a subplot to each of the other players we see, meaning we end up with a long play but don't get much more characterisation out of it than The Bald One (Charlie Clements,) The Gobshite (Danny Walters,) The Angry One (Graeme McKnight,) The Accident-Prone One (Gregg Baxter) and The Fat Lazy One (Head.) 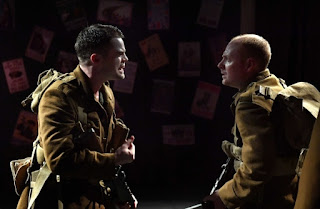 In a particularly egregious case of Multiple Ending Syndrome, there's a scene that, although wildly sentimental, is also very obviously where this particular story ends, but Head keeps the play going for another 15 minutes of telling us why we should feel sad about the loss of life. Nick Hancock, presumably cast mainly for his association with sport, doesn't really bring the warmth meant to come from the grizzled ex-army manager, and the one interesting piece of insight - that the drive to shame sportsmen into signing up also had the intention of making all their fans follow them to their doom - is rather fleetingly dealt with. Tilly Vosburgh's production just can't disguise the fact that Head really should have taken his cue from a football match, and kept the show down to 90 minutes; it runs more than an hour longer than that.

The Greater Game by Michael Head, based on They Took the Lead by Stephen Jenkins, is booking until the 15th of October at Southwark Playhouse's Large Theatre.