PREVIEW DISCLAIMER: Despite already having had a full run in Bath, this doesn't seem to have invited the newspaper critics in yet. 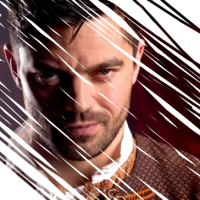 A comedy about the Restoration, as opposed to a Restoration Comedy, although we do see something of that genre's creation in The Libertine, a 1994 play by Stephen Jeffreys first seen at the Royal Court and now getting a West End revival from Terry Johnson. George Etherege's best-known work The Man of Mode* is reputed to have been based on the real-life 2nd Earl of Rochester, John Wilmot, and it's Rochester (Dominic Cooper) that Jeffreys puts centre-stage, a favourite of Charles II (Jasper Britton) which is probably the only reason he managed to avoid execution. A regular at London's playhouses, except when he's been banished to the country for pissing off the king, at the start of the play Rochester returns from one such involuntary trip to find a new actress in town: Lizzie Barry (Ophelia Lovibond) is routinely booed off the stage for what, compared to the highly stylised acting style of the time, seem like incredibly unenthusiastic performances.

Rochester, though, sees in them an early attempt at naturalism, and appoints himself her acting coach, with the ultimate aim of course of making Lizzie his mistress. 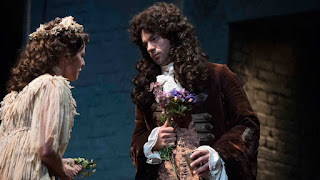 He also has a wife he married for her money (getting her attention in the first place by abducting her) and continues to drink and whore his way around London, but this isn't particularly unusual behaviour at the time and, despite Rochester introducing himself in a prologue all about how unlikeable he is, Jeffreys' play has a different theory about him: That Rochester became notorious not so much because of his behaviour as for the fact that, alone in a time of excess, he realised the ridiculousness of the court and its debauched way of life. It's his poems and plays mocking the king and his mistresses that get him into the most trouble. 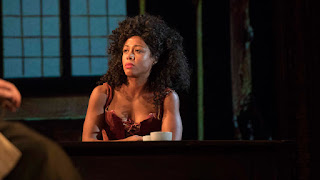 Rochester's coterie includes the playwright Etherege himself (Mark Hadfield in a performance that... well it's Mark Hadfield so you already know what the performance is like) but despite the attitudes of the men around them, the play itself does well for its actresses with three memorable female roles - Lovibond has the eye-catching role as Lizzie, who's unafraid to talk back to the powerful men, but there's also quietly tragic moments from Alice Bailey Johnson as Rochester's wife Elizabeth, contrasting with grounded, no-nonsense narration from his favourite prostitute Jane (Nina Toussaint-White.) 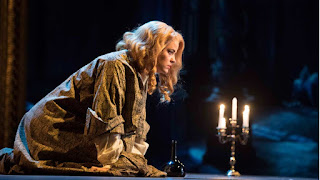 Cooper himself has a self-confessed typecasting as cads and seems to enjoy playing this one. The play does have a bit of an identity crisis though: It sort of follows the style of a Restoration Comedy, with various characters having asides to the audience and the occasional dip into verse, but doesn't commit to being as silly as that. In fact Jeffreys has a more tragic tone in mind for the second act, and neither comedy nor drama feel entirely well-served by the end. It's still a cut above the TRH's usual (low, low) standards though, a good-looking (designs by Tim Shortall) production with a quality cast, but never remotely as scandalous as its antihero - despite a song about dildos - and never quite finding the spark that Billy (Will Merrick) is searching for at the end.

The Libertine by Stephen Jeffreys is booking until the 3rd of December at the Theatre Royal Haymarket.

*apparently The Libertine's premiere production played in rep with The Man of Mode, so it was presumably created as part of the same scheme as Our Country's Good, which features The Recruiting Officer and also originally played alongside it at the Royal Court.
Posted by nick730 at 23:05