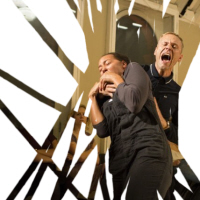 Nathaniel Martello-White's second play Torn has, like his first, a deliberately messy structure, although with much more successful results this time. Angel (Adelle Leonce) opens the show with the cryptic statement "it happened," words which she intends to open up old family wounds, but which most of the family aren't willing to listen to: As a child she accused her stepfather Steve (James Hillier) of abuse, something she then quickly retracted. Now she's decided to confront everyone with the fact that it was true all along, and she especially wants to deal with her mother 1st Twin (Indra Ové) - most of the characters don't get names beyond their position in the family - and the reasons she wanted Angel to keep quiet. In his first play Blackta, Martello-White focused a lot on gradations of skin tone, and if there's anything even remotely autobiographical about Torn it explains a lot about where this interest comes from.

Because in this mixed-race family there's a not-even-secret hierarchy according to skin colour, 1st Twin palming off her darker-skinned daughter Angel on her sister Aunty L (Lorna Brown) as often as possible, and she's even been known to pretend her older black children don't exist, favouring the white children she went on to have with Steve. 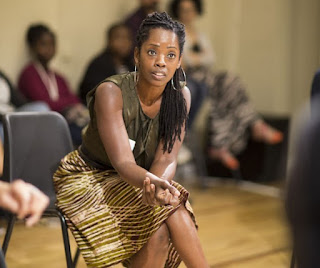 Ultz's design for Richard Twyman's production strips back the Royal Court Upstairs to make it look like the sort of community space where an AA meeting might be held, or in this case an extreme kind of family therapy. The audience form an outer circle and the cast an inner one, and at the play's opening Leonce arranges the chairs herself, taking special care that each faces another directly - this is going to be a confrontation whether her family like it or not. 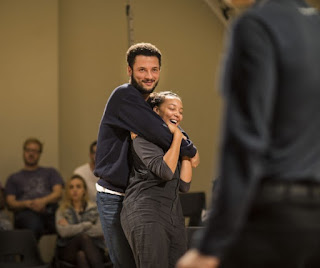 The story plays out in a blur of overlapping scenes and flashbacks, the sort of structure where it's initially difficult to make out quite who the characters are or what's going on, but which makes it more satisfying when the story starts to fall into place. Aunty J (Kirsty Bushell) is largely there to do impressions of the women's late mother, whose attitudes informed the family's current dysfunction, while 2nd Twin (Franc Ashman - everyone's changing their stage name this year, it'll play havoc with the labeling on the blog) stands firmly behind her twin despite her own suspicions. 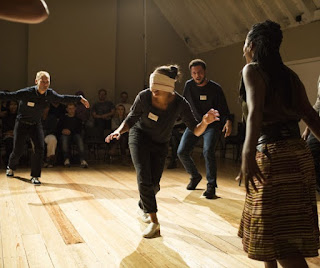 2nd Twin's son Couzin (Osy Ikhile) works in the arts, something which means he comes in for a certain amount of homophobic assumptions from Brotha (Jamael Westman.) It's perhaps meant as another aspect of the tension between what's expected of a black family but in a short play it feels like it's overloading it with ideas a bit - Torn is best when it's anchored with the excellent Leonce as Angel, whose alienation from the rest of the family keeps us guessing for quite a lot of the play as to whether she's telling the truth. It's an intense ninety minutes covering a number of disturbing possibilities, although its most chilling element may be 1st Twin's utter lack of emotion for her daughter.

Torn by Nathaniel Martello-White is booking until the 15th of October at the Royal Court's Jerwood Theatre Upstairs.

Air conditioning status: The stairway where you queue to get in is hot but the theatre itself is really comfortable.